The House of Staunton has accurately reproduced this legendary chess set from the 1950 Chess Olympiad held in Dubrovnik,  Yugoslavia. The King stands 3-5/8” tall with a 1-5/8” base. Each of the chess pieces rests atop green baize base pads. One design feature of these Dubrovnik Staunton chessmen is the lack of Religious adornments. The Christian Formeé cross has been replaced with a simple ball finial and the traditional Bishop’s miter has been eliminated. The only accommodation made to current praxis is the addition of ballast to the pieces for increased stability. The originals were unweighted. A comparison of The Fischer Dubrovnik chessmen recreation with the Original 1960 Dubrovnik is shown here. 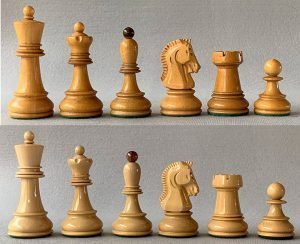 This set of chessmen includes an extra pair of Queens to assist during Pawn Promotion, a feature pioneered by Frank Camaratta in 1995. This reproduction of the 1960 Fischer Dubrovnik Chessmen is available in Natural and Black or Red stained Boxwood as well as Lacquered Boxwood and Anjan wood (which closely resembles the original finish). The chessmen are new. Unlike similarly named sets, this reproduction of the 1960 Fischer Dubrovnik Chessmen is the only accurate reproductions currently on the market. This reproduction was executed by Frank Camaratta and is part of the Camaratta Signature Series. The 9th Chess Olympiad is now just a memory – and these 1960 Fischer Dubrovnik reproduction chessmen are a fitting tribute to that memorable event. The chessmen play and display best on a chessboard with 2-1/8″ or 2-1/4″ squares. The chessboard shown is not included, but a suitable new or antique chessboard can be found elsewhere on our site.

The 9th Chess Olympiad was held from August 20 through September 11, 1950, in Dubrovnik, FPR, Yugoslavia (Present day Croatia). The acclaimed 1950 Dubrovnik in Chess pieces were designed and manufactured specifically for this Olympiad. These chess pieces were also used for the Bled leg of the 1959 Bled-Zagreb-Belgrade Candidates Tournament, which was won by Michael Tahl. 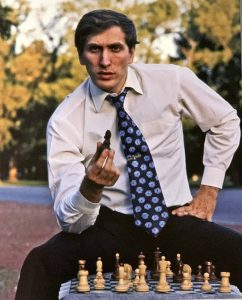 It is well known that Bobby Fischer ranked the 1950 and the later 1960 Dubrovnik Chessmen, designed by Andrija Maurović, as the best set of chess pieces for serious play and analysis. He often heaped lavish praise upon them. However, exactly which Dubrovnik pieces was Fischer referencing? Well, there were at least two versions. However, the actual 1960 Dubrovnik, set often pictured with Bobby and preferred by him, has not heretofore been reproduced. Now, we have changed all that. Using pieces from an actual 1960s set, a precise recreation of Fischer’s favorite set has been made – the Fischer-Dubrovnik Chessmen.