An exact reproduction of the original Fischer Spassky chessmen, demanded by Robert J. (Bobby) Fischer for his 1972 World Championship match with World Champion Boris Spassky. aKing is 3-3/4” with a1-5/8” base. Boxwood and Ebony, heavily weighted. 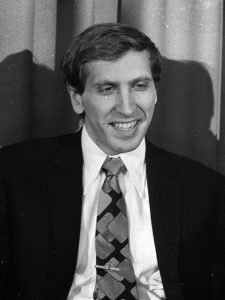 Offered here is a new set of the Fischer Spassky Chess Pieces. The original Fischer Spassky chessmen, Jaques 50040, were the style chessmen demanded by Robert J. (Bobby) Fischer for his World-famous 1972 Cold War Era World Championship match with Soviet Grandmaster and then World Champion Boris Spassky. The chessmen are Boxwood and Ebony, heavily weighted with green English baize base pads. The King stands 3-3/4″ tall with a 1.6″ diameter base. This King height is often referred to as the Tournament Size.  The White King is stamped “F. Camaratta U.S.A.” on the rim of the base. The King side Rooks and Knights are stamped with a red crown on their summits. Although lacking the exquisite craftsmanship and finish of the early Jaques chessmen, the Fischer Spassky design is very playable, durable, and has a great board feel. These chess pieces are the exact design used in the 1972 match. They were designed and supplied by us for Jaques of London between 1999 and 2007 using an original set of 50040 chess pieces from 1972. The unused inventory has recently been rebranded and is offered here.

The World Chess Championship 1972 was a match for the World Chess Championship between challenger Bobby Fischer of the United States and defending champion Boris Spassky of the Soviet Union. The match took place in the Laugardalshöll arena in Reykjavík, Iceland, and has been dubbed the Match of the Century. Fischer’s win broke the 30 year iron grip the Soviet Union had held on the World title. The match was full of suspense and possibly the most followed sporting event of the century. It featured the drama of Fischer’s refusing to continue play after his demands were not met, plus phone calls from then President Richard Nixon and Secretary of State Henry Kissinger imploring him to play “for the honor of his country.” In spite of falling behind 2-0, Fischer stormed on to win the match by an impressive 12.5 – 8.5. The result is even more impressive if you exclude Fischer’s forfeiting Game 2! Fischer became the first American born in the United States to win the world title, and the second American overall (Wilhelm Steinitz, the first world champion, became a naturalized American citizen in 1888). Fischer’s win also ended, for a short time, 24 years of Soviet domination of the World Championship. The first game was played on July 11, 1972. The last game (the 21st) began on August 31, was adjourned after 40 moves, and Spassky resigned the next day without resuming play. Fischer won the match 12½–8½, becoming the eleventh undisputed world champion.