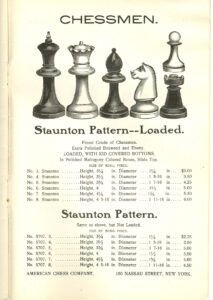 Offered here is a set of chessmen sold through The American Chess Company. The King stands 3-1/4” tall with a 1-1/4” Base. The chess pieces are unweighted with tan kid leather base pads. The American Chess Bulletin was a subsidiary of The American Chess Company. The address for both is listed as 150 Nassau Street, New York. It is listed in their advertisements as the No. 5707. 3. They offered weighted and unweighted Staunton chessmen in King heights from 3-1/4″ to 4-5/16″ (The size pieces actually used in the tournament). The chessmen are in excellent condition and are housed in a replacement cigar box. These chess pieces play and display best on a chessboard with 1-7/8″ to 2-0″ squares, For a complete selection of our finest new and antique chessboards, please check out our extensive collection.

These sets were produced through January 1910. That is the last Advertisement for Staunton Chessmen with kid leather base pads. After that, the American Chess Company listed their Staunton chess sets as imported They also advertised wooden chess sets by C. H. Bird, W. F. Drueke, and Jaques of London. The Jaques offerings included their patented In Statu Quo, Whittington and Railway Travel chess sets.

The chessmen offered here are identical in style to the larger, weighted sets used for the 1904 Cambridge Springs International Chess Congress. The surprising upset victory of Frank Marshall there marked his rise to prominence in American chess. He would eventually reign as champion of the United States for twenty-six years. Cambridge Springs 1904 marked the end of Harry Nelson Pillsbury‘s chess career. He would not play another tournament before his death in 1906 at the age of 33.

The American Chess Bulletin, Vol. I, No. 1, published in June 1904, was essentially the first “book” written about the 1904 Cambridge Springs International Chess Congress. The Bulletin mentions that “The eight sets of boards, pieces and clocks used by the competitors in the tournament, each accompanied by a certificate bearing the signatures of the sixteen players, were purchased by the following gentlemen:” 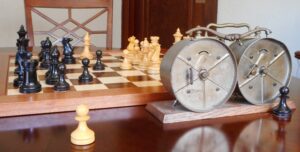 In the December 1995 issue of Chess Life, page 14, GM Andrew Soltis states “After the great tournament at Cambridge Springs, Pennsylvania, in 1904, the organizers tried to recoup some of their expenses by selling boards and sets, at $15. That stunned Mikhail Tchigorin, who complained the cheap pieces weren’t worth more than $2.50 – and the poorly made paper boards only 10 to 15 cents. They sold out anyway.”

The 1904 Cambridge Springs Chess Congress was the first major international chess tournament in America in the twentieth century. It featured the participation of World Champion Emanuel Lasker, who had not played a tournament since 1900 and would not play again until 1909. After the tournament Lasker moved to America and started publishing Lasker’s Chess Magazine, which ran from 1904 to 1907.

However, that was not the only chess magazine spawned by the tournament. The first issue of a Bulletin, produced by Herman Helms with Hartwig Cassel, was a report on the famous 1904 Cambridge Springs tournament. The daily Bulletins produced by Helms proved so popular that he and Hartwig Cassel started the American Chess Bulletin as a direct consequence. The American Chess Bulletin was be edited and published monthly (November-April) and bi-monthly (May-October) by Helms from 1904 until his death in 1963, at which point, the publication ceased. A strong player, Herman Helms gave up his playing career for reporting and editing.