Lot #R007. Anri Fridericus Rex Chessmen, One of the Rarer of the Anri Sets

One of the Rarest of the Anri Chess Sets, the Anri Fridericus Rex Chessmen. The King stands 4.7″ tall. The hand carved Chess pieces are hand-painted, and the bases are weighted and felted. The set is housed in its two-tray, fitted presentation case. Produced between 1970 and 1973.

Offered here is one of the Rarer of the Anri Chess Sets, the Anri Fridericus Rex (Frederick II of Prussia) Chessmen, Item #718-022. This is a beautifully hand-carved and hand-painted set of chess pieces. Each of the chess pieces is magnificently hand-carved and painted. The King stands 4.7″ tall with a 1.7″ diameter base. The finely hand carved Chess pieces are crafted from alpine maple and are hand-painted and gilded, the bases are lightly weighted, and the pieces are felted. The Chessmen are housed in its original two-tray, fitted presentation case. The Anri Fridericus Rex Chessmen are in excellent condition and were produced between 1970 and 1973. Only a few of these sets were produced. The Official Anri Guide listing for these chess pieces is shown here. No chessboard is included with these chessmen, but we offer a large selection of modern and antique chessboards here. Anri chessmen are 100% made in Italy for those who can appreciate the true value of these magnificent artistic chessmen. 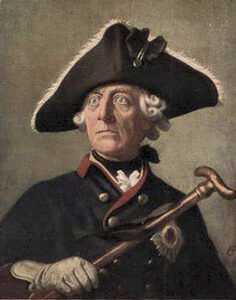 Frederick II (Friedrich II.; 24 January 1712 – 17 August 1786) was King of Prussia from 1772 until his death in 1786. His most significant accomplishments include his military successes in the Silesian wars, his re-organization of the Prussian Army, the First Partition of Poland, and his patronage of the arts and the Enlightenment. Frederick was the last Hohenzollern monarch titled King in Prussia, declaring himself King of Prussia after annexing Polish Prussia from the Polish–Lithuanian Commonwealth in 1772. He became known as Frederick the Great and was nicknamed “Old Fritz“.

Frederick was a supporter of enlightened absolutism, stating that the ruler should be the first servant of the state. He modernized the Prussian bureaucracy and civil service and pursued religious policies throughout his realm that ranged from tolerance to segregation. He reformed the judicial system and made it possible for men of lower status to become judges and senior bureaucrats. Frederick also encouraged immigrants of various nationalities and faiths to come to Prussia, although he enacted oppressive measures against Catholics in Silesia and Polish Prussia. He supported the arts and philosophers he favored and allowed freedom of the press and literature. He is buried at Sanssouci in Potsdam. Childless, he was succeeded by his nephew, Frederick William II. For a more extensive coverage of Frederick the Great, click here.