A hand-carved and paintedbset of Anri Montsalvat Chessmen in its original Alpine Maple Compartmented box. The King stands 5-1/2″ tall. Circa 1949 to 1960 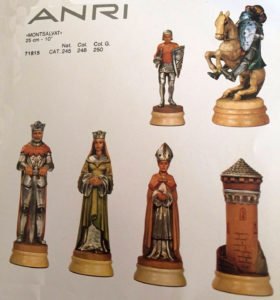 Offered here is a set of the famous Anri Montsalvat Chessmen, with beautifully hand-carved and hand-painted figural pieces. This is the Standard size, with a King height of 5-1/2 inches. The King from the Dark Army still bears the Anri sticker on he underside of its base. The chessmen represent King Arthur and the Knights of the Round Table. The name of the chess set is taken from the castle where the Holy Grail is housed in the legend of “King Arthur and the Knights of the Round Table”. These finely hand carved Anri Montsalvat Chessmen are crafted from Alpine Maple and are hand-painted and gilded. The bases are moderately weighted and the pieces are felted. The chess piece are housed in their large Alpine Maple hinge-top box with removable compartmented trays. The Chess Pieces are in excellent condition. The box has very attractive graining. It has lost some of its burgundy flocking on the underside of the box. The Anri Montsalvat Chessmen are the most famous of the ANRI chess products.  They are 100% made in Italy for those who can appreciate the true value of these magnificent artistic chessmen. These sets were produced between 1949 and 1960.  The set was made in Italy by Italian craftsmen. The Montsalvat sets were made between 1949 and 1960.