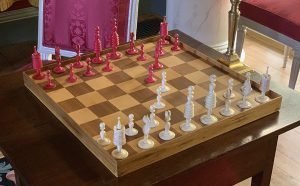 This offering is an example of a set of Antique Calvert Revolutionary War Chessmen. The chessmen are natural and red-stained ivory. The King stands 3-1/2″ tall with a 1-1/2″ diameter base. The Royal chess pieces are an evolution of the Selenus pattern with the distinctive features of the well-known Calvert Pistil and petal design. The Rooks are full rusticated towers, typical of the work of John Calvert, with staffs and accentuated brick-work. The Bishops and Pawns are headpieces and spheres mounted atop self-similar baluster pedestals with wide, flattened bases. The Rooks and minor pieces are typical of those found in pre-1800 chessmen, particularly the brickwork on the Rooks and the distinctive “Question Mark” Knight style. The minor pieces and pawns are very similar in style to those seen in the accompanying photograph taken in the Keeping Room of the James Madison Montpelier, Virginia House. These Calvert Revolutionary War Chessmen are among the style chess pieces used during the latter half of the 18th century and early 19th century. The chess pieces were likely produced by John Calvert around 1795. These are authentic antique chessmen that will make a fine display. The chessmen are in excellent condition. The red stain is still strong and vibrant and the pieces project a very pleasant “antique” aura. The antique chessboard shown is not included. A suitable chessboard can be found elsewhere on this site.

Some Background on the Calvert Design.

The Calvert chessmen were produced in the workshop of John Calvert, located at 189 Fleet Street where he operated his business between 1790 until his death in 1825. He was awarded the title Master of the Worshipful Company of Turners in 1819. After his death, the business was continued by his widow, Dorothy, until around 1840. This Calvert Petal and Pistil Playing set is an outgrowth of the Selenus deign and  is normally attributed to John Calvert. Similar sets of chessmen were made by Thomas and William Lund as well as George Merrifield and John Jaques, among others. These John Calvert Petal and Pistil chessmen fall into the ubiquitous category often referred to as English Playing sets, which also included the Saint George, Northern Upright, Lund and Barleycorn patterns. English Playing sets were ultimately supplanted by the Staunton chessmen which were introduced to the public in September of 1849.