A complete antique game of Pachisi or Parcheesi, 16 ivory tokens, 8 elongated dice an Indian Cross and Circle playing cloth and cowrie shells.. The tokens measure 7/8′” tall by 7/8″. distinguished by concentric colored rings. The dice are 3-1/4″ long by 1/2″ square. Circa 1750.

A Set of Antique Pachisi or Parcheesi Tokens, Cloth and Dice.

Offered here is an Antique Game of Pachisi or Parcheesi, with 16 dome-shaped tokens, 8 elongated dice or “bones” and an authentic Indian Cross and Circle playing cloth. Also included are a number of cowrie shells, which players in India often throw in place of Dice. The squat bullet-shaped tokens measure 7/8′” tall by 7/8″ at the base. Each token is distinguished by three concentric colored rings at the top and on their underside and a pair of rings neat the top and along the bottom, in the manner of the Pawns in the Muslim chess sets of the period shown on the left. The dice measure 3-1/4″ long by 1/2″ square. This set offered here likely dates to the mid18th Century. 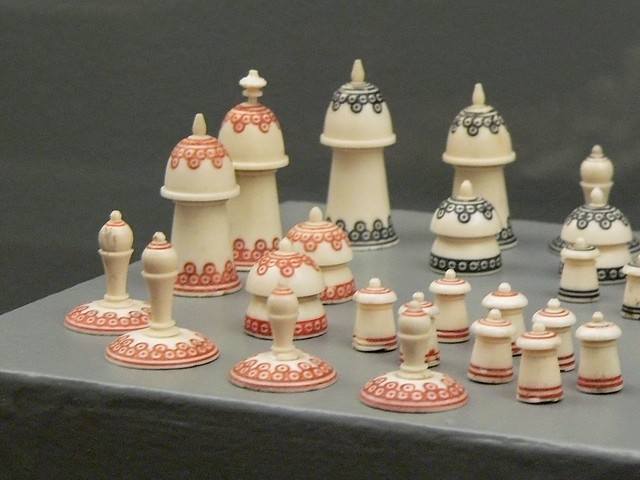 Pachisi, originated in medieval India. The cross and circle board game design is used for race games played throughout the world. It can be played by 2-4 players, the first player to move all the tokens around the board to the home position wins. One of the main differences between Parcheesi and Pachisi is that Pachisi is played in two teams of two players, each with their own set of tokens, which adds a new level of strategy as each player works to help their partner’s tokens as well.

The first clear claim is a copyright granted to John Hamilton of the Hudson River Valley in 1867. Originally called Patcheesi, the name was changed to Parcheesi a year or so later. Hamilton sold the rights to the game to Albert Swift, a New York goods manufacturer, in 1867 or 1868. Swift, in turn, sold the rights to E.G. Selchow & Co., a New York City game manufacturer in 1870 who trademarked it as Parcheesi in 1874. The company was founded as E.G. Selchow & Co. in 1867. In 1880 it became Selchow & Righter to reflect the partnership with John Righter. Until the 1950s, when the company bought the rights to Scrabble, Parcheesi was their hottest selling game. Parcheesi was America’s best-selling game until the release of Monopoly in 1935 by Parker Brothers. For years now, the North American Rights have been held by Hasbro, Inc. Pachisi is likely the precursor to the popular game of Backgammon.

The game of Pachisi dates back to the 4th century A.D. in India. It is often called the national game of India. Instead of dice, players throw six to seven cowrie shells. The name, Pachisi, comes from the highest number one can throw, twenty-five, or pachis in Hindi. The game headed west in the 1860s, first traveling to England (which had taken over rule of India from the British East India Company in 1858) and then further into Europe. In the late 1890s, the English developed a simpler form called Ludo, which was primarily designed for and played by children.

Pachisi is the younger sibling of a game called Chaupar, which was a slightly more complex and highbrow version of the game played by aristocracy. Although the rules are different, it is the ancestor of Parcheesi. Chaupar appears throughout Indian history and culture as well. For example, it received a popularity boost when it was featured in the Mahabharata, one of India’s classic epics believed to have originated between 540 and 300 B.C. In this text, the character Shakuni uses Chaupar to defeat his enemy, Yudhisthira.

How Pachisi came to America from India is unclear and stories are conflicting. Pachisi first appeared in America between 1867 and 1870, where it took on the name of Parcheesi as it is known in the West today. The rights to the game went through several changes of ownership, but they currently reside with Hasbro. As a result, while there are many games today that are similar to Parcheesi, only those sold by Hasbro can use that name. Games produced by any other company often give their products vaguer monikers, such as Milton Bradley’s “The Game of India.”