This offering features an antique push bar Swedish Schackvarlden Chess Clock with two metal timing mechanisms mounted within a dark-stained wooden case. The face of the dials is marked “TYP” and “Schackvarlden” (Chess World in Danish and Swedish). The unusual feature of these push bar game timers is that 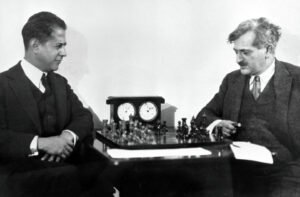 the players stop their clock and start their opponent’s be pushing a high-mounted horizontal wooden sliding bar  that employs metal strips to engage one of the escapements, thus causing that timing mechanism to stop. The more typical method is two buttons mounted atop the frame, an arrangement that is far more convenient than pushing the bar, which can cause the clock to slide unless it is held while pushing the slide bar. The back of the case is hinged so that it can be pulled down to expose the two timing mechanisms for servicing or adjustments if needed, without the annoying need for removing screws to access the timers. The case measures approximately 11″ x  5-1/2″ x3-3/8″. The case is in very good condition. Both the movements are in good working order.

The push bar Swedish Schackvarlden Chess Clock dates from around 1920 to 1930, These Timers were used in many clubs and could be found in use at tournaments of all levels throughout the United Kingdom and Europe. The image on the left shows a similar push bar chess clock in use from the Capablanca – Lasker1921 World Championship match, which was held in Capablanca’s native Havana in 1921 from March 18 to April 28. Capablanca won the match by a score of 9-5 (4 wins, 0 losses, 10 draws) to become the third World Chess Champion.