A large, elaborately carved, set of Antique Vizagapatam Chess Pieces, Natural and red-stained, made by the East Indian John Company. The King stands and impressive 5-1/2” tall with a 1-5/8″ diameter base. The chessmen are in like new condition, which is astounding for a set of chessmen this old. These pieces date to around 1800 – 1830. A wide selection of suitable antique and modern chessboards for these exquisite chess pieces can be found here. 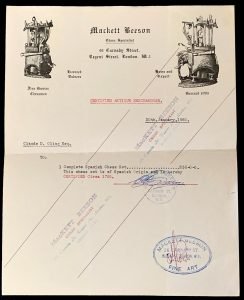 The chessmen are accompanied by the original, hand-typed and signed letter from famed British dealer and author, Mackett-Beeson, dated 30th of January. 1960, transferring ownership of the Antique Vizagapatam Chess Pierces to the new owner, Claude D. Olin, Esq. for the princely sum of £35! Of particular note is Mackett-Beeson’s claim that the chessmen were of Spanish origin and produced around 1760. Obviously, he was mistaken. Some very interesting antique chessmen can be found in Mackett-Beeson’s very popular book, Chessmen, is copyright 1967.

Visakhapatnam (or, phonetically, Vizagapatam) is the largest city, both in terms of area and population in the Indian state of Andhra Pradesh.The city is nestled between the Eastern Ghats mountain range and the Bay of Bengal, and is often known as The Jewel of the East Coast, The City of Destiny and the Goa of the East Coast.

Visakhapatnam’s history stretches back to the 6th century BC. Archaeological records suggest that the present city was built around the 11th and 12th centuries. Conquered by the Mughals in the 16th century, European powers eventually set up trading interests in the city, and by the end of the 18th century it had come under French rule. Control passed to the British in 1804 and it remained under British colonial rule until India’s independence in 1947.