Offered here is a set of Boxwood and Ebony Ayres Staunton Chessmen, Tournament Size. The King stands 4-0″ tall with a 1-5/8″ diameter base, which is commonly referred to as the Small Club Size. Sets with King heights between 3-5/8″ and 4-0″ have become the standard praxis today for serious tournament play. Full Club-size sets will have a 4-1/4″ to 4-1/2″ King. The chessmen are weighted and rest atop green baize base pads.  There are no crown impressions on the summits of the Kingside Rooks and Knights, as was typical for the earliest production run of Ayres Staunton chessmen. The chess pieces are housed in their original Mahogany hinge-top box, inscribed “F. Fremlin Maidstone, 1894” under the lid. Also included with this set are numerous chess column clipping from 1894 to 1905, featuring games of Steinitz, Marshall, Pillsbury, Lasker Tschigorin, Blackburne, Maroczy, Tartacower, and other notable chess players from that era. This particular set of F. H. Ayres Staunton Chessmen was produced around 1894, These earliest examples featured a very detailed Knight head. Knights found in the post-1900 cuttings were far less detailed. The chessmen play and display best on a chessboard with 2-1/4″ or 2-3/8″ squares. The chessmen are in excellent condition. The chessboard shown here has 2-1/4″ squares to illustrate the pieces on a standard size chessboard. The chessboard is not included, but a suitable chessboard can be found here.

F. H. Ayres was an English sports and Games manufacturer and retailer dating back to 1810, doing business in Aldersgate in the city of London. It is known from various ads that they produced and sold Chess sets of various quality and styles. However, despite putting their name on most of their other products, they never put their name on their chess sets. This has led to a real problem of identifying which style Staunton chessmen they did produce and whether they sold them at the retail level or only wholesale to retailer or other manufacturers.

A report in the June, 1895 issue of Strand Magazine, by William G. Fitzgerald, documents visits to several London firms that made sporting goods. The visit to F. H. Ayres takes up most of the space in the article. The article contains many images, though not actual photographs, but ‘half-tone’ images. The article in the Strand Magazine article stated that Ayres employed twenty craftsmen making chess sets.

Aside from a few ads by Ayres illustrating rather ubiquitous images of Staunton chessmen designs, there was never a catalog produced by Ayers illustrating the range and prices of chessmen offered by them or any supporting images of their various designs. There have been some suggestions that these sets were made by a different company (Jaques or BCC), but heretofore, no documentary evidence has been produced to support or refute these assertions. 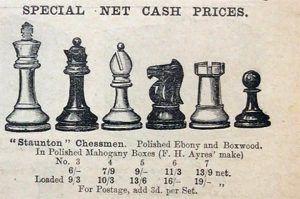 Until now, this style of chessmen had been attributed to F. H. Ayres with no clear proof of attribution.  The Chessmen are of very high quality, almost the equal of Jaques of London chessmen from the 1920s. All this has led to a running debate – What is an Ayres Chess set?  The argument in favor of Ayres previously went something like this: “Ayers made wooden Staunton chess pieces. This is a set of Staunton chess pieces. Ergo, Ayres made these chessmen. Heretofore, other than that argument, nothing more substantive had been put forward supporting the thesis that these sets were made by F. H. Ayres. However, our ongoing research into this mystery has uncovered this revealing page from a Benetfink & Company ad for Ayres chessmen. This advertisement by Benetfink will put finally this discussion to rest.