Offered here is an rather unusual set of C. H. Bird College Size Chessmen. The King stands 3.0″ tall with a 1.2″ diameter base. The Chess set is black and natural Pyralin lacquered. Circa 1920

Offered here is a set of C. H. Bird College Size Chessmen. The chess pieces are weighted and felted. King stands 3.0″ tall with a 1.2″ diameter base. These vintage chess sets were produced around 1920. The Chessmen are black and natural lacquered. The unusual feature of the C. H. Bird College size Chessmen is the unique Knight. Interestingly, this is exactly the same Knight carving technique taken by William T. Pinney to save on the cost of carving the Knight heads on this Liberty chessmen, which was expensive and time-consuming. The chessmen are housed in their original dark green cardboard box, with the bottom stamped “Made in U.S.A., Bird’s Chessmen, College Size, Black and Natural, Pyralin Enamel Finish, Loaded and Felted“. The pieces are in excellent condition, although a few pieces have had their baize base pads replaced. These chess pieces play and display best on a chessboard with 1-3/4” squares.  For a complete selection of our finest new and antique chessboards, please check out our extensive collection. 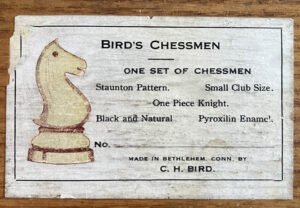 That article describes the approach C. H. Bird took to try and produce a more cost-competitive set of chessmen.  Basically, he designed the Knights as slab-sided, carved from a single piece of wood. The style of the new Chess Knight is illustrated on the later production labels (Shown here) and affixed to the chess sets sold by the company. Also, note the mention of his use of Pyroxylin Enamel to finish his chessmen, rather than the more costly and less durable than the traditional European French Polish. The word “Pyralin” on later boxes and labels referred to a high-grade version of pyroxylin used to paint cars and locomotives, thus indicating a later date of manufacture. Pyroxylin is the name of a plastic created in the late 1800’s based on nitrocellulose.  Nitrocellulose, also known as celluloid, was one of the most extensively used plastics of the time.

According to a later advertisement in the 1932 issue of The Chess Reporter, Bird’s chessmen were available in two sizes, the Small Club-Size Chessmen, 3.6” King with a 1.5” diameter base and all the pieces weighted felted, and the smaller College-Size Chessmen, where only the major pieces were weighted and the Pawns had extra wide bases – a rather curious decision.