A rare, Limited Edition Cybis Porcelain Chess Set #5/10. The King stands 7″ tall. The Cybis Chessmen were presented to the USSR by Richard Nixon in 1972.

Offered here is the original, Limited Edition Cybis Porcelain Chess Set #5/10, with a 7” King, circa 1970. One army is predominantly green in color and the opposing army is primarily Blue. The figural chessmen are housed in a large Mahogany storage casket housing two removable trays with fitted compartments to store the chessmen. Cybis experimented with this casket, which is larger and more elaborate than the earlier ones, the only one made one in this comfiguration.

The delicately sculptured porcelains are decorated with jewel-like enameling. Only twelve Cybis Porcelain Chess Sets were created by the studio originally. The first set was the actual gift of state. The second set was given to the Smithsonian Institution where it still resides. Neither of these two sets are numbered. An additional ten sets were made in a numbered limited edition of 10. This is one of the original 10 sets and is NOT one of the later “Hall of Fame” editions. The two versions are entirely different and do not have the same value, as explained later.

One of the most ambitious porcelain works by the post-1950s Cybis studio was also perhaps their most unusual. This is the elaborate chess set that was first created during the 1970s, although there were actually three versions produced over the course of the next two decades. 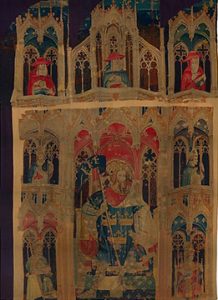 he story of the Cybis Porcelain Chess Set began in late 1971 when the White House commissioned the creation of a one of a kind chess set to be presented as an official gift of state from the United States to Russia to mark the historic 1972 Moscow Summit meeting between President Nixon and Soviet Premier Brezhnev. The design appears in the records of the US Copyright Office applications that year as Chess set (Assorted Medieval figures on bases) 6 porcelain chessmen; Application title Chest Set; © Cybis; 1 Mar 1972; GP79764. Because the chessmen were the same in both colors only six distinct sculpture designs needed to be copyrighted. (yes, the entry does actually say “chest” set!)

The set itself was inspired in large part (although not in its entirety) by portions of the 14th-century Nine Heroes Tapestries, which themselves were based on a poem written by Jacques de Longuyon in 1310. The “nine heroes” represented in the tapestry were drawn equally from Hebrew (Joshua, David, and Judas Maccabeus), Christian (Charlemagne, Arthur, and Godfrey of Boullion) and “pagan” (Hector, Alexander the Great, and Julius Caesar) history. The Cybis pieces were based on at least two of these: the king represents Arthur, and the pawn reproduces one of Alexander’s archers.

The photo shows the full surviving King Arthur Tapestry. The Cybis Porcelain Chess Set King is quite faithful to the original in design. The Pawn is based upon the archer from the Alexander Tapestry. The tapestries currently reside with the Metropolitan Museum of Art in New York City, at their location known as The Cloisters which showcases medieval art. The designer of the Cybis chess pieces was Harry Burger Jr. of Trenton, NJ, an artist who designed a number of sculptures for Cybis even during their early years of production in the late 1950s.

Starting in the early 1990s the Cybis studio introduced the Hall of Fame edition, which is a downsized replicas of the original. Cybis made the decision to violate their longstanding “never to be issued again” rule by creating a new, smaller version with some differences.  These would be an option for collectors who either could not afford or cannot locate an original. A more in-depth history of these historic chess pieces can be found here.

The Hall of Fame edition of the Cybis Porcelain Chess Set differs from the original in size and possibly by a copyright date. There may also be slight differences in the color. Unfortunately when these Hall of Fame sets are offered for sale by re-sellers, they rarely include any designation which would indicate that they are not the original issue.