A Italian, limited edition, Dario Costantino Capodimonte Porcelain figural chess set. King height 5.5″ by 1,9″ base. The piece is 20th century, based on a medieval theme. The undersides bears the maker’s marks of a crowned N and DARIO CONSTANTINO 1/250 LIMITED EDITION. 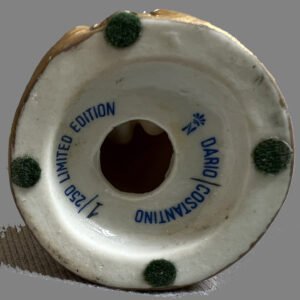 Offered here is an Italian, limited edition, Dario Costantino Capodimonte Porcelain figural chess set. The piece is 20th century, and the subjects are based on a medieval theme. The opposing army is predominantly in black with off-white hues, heightened in silver and gilt metallic glazes. The kings are wearing crowns, the queens adorned in Medieval dress. The bishops are depicted as courtiers holding staffs and the knights are rearing horses. The rooks are conventional towers, and the pawns are archers, The undersides of each of the chessmen bears the maker’s marks of a crowned N and DARIO CONSTANTINO 1/250 LIMITED EDITION.

The Capodimonte porcelain, dates its origins to the Bourbon dynasty. In 1743, King Charles of Bourbon and his wife Amalia of Saxony founded a center for porcelain production within Reggia di Capodimonte, with the aim of achieving a porcelain similar to the German, produced at Meissen. This led to the establishment of the Royal Factory of Capodimonte, whose production was arguably considered superior to German and French. In the 1700s, personalities like the sculptor Giuseppe Gricci, the chemist Livio Vittorio Scherps and decorator Giovanni Caselli helped formulate the composition of the porcelain. In addition, Gricci created the famous little living room in porcelain of Queen Amalia, considered the most complete expression of the artistic style of Capodimonte.

The most flourishing period of the Royal Factory of Capodimonte lies certainly in the last two decades of the eighteenth century when it was born a real art school led by Domenico Venuti, who made valuable services of porcelain, now preserved in the Museum of Capodimonte.

Currently, the Royal Factory of Capodimonte has become one of the largest museums in Naples which preserves the most famous pieces of the Neapolitan tradition. The craftsmanship of Capodimonte porcelain continues to this day. The manufacture follows the dictates of the famous artisan tradition of Capodimonte porcelain. It starts with an idea of the artisan, then, he creates the plaster model with lathe, which is carved by hand, creating the casting. After which, the artisan pours the mixture of porcelain in the plaster mold. Once porcelain sets, the model is carved and cooked at a temperature of 1250 degrees. At this point, the artist paints the model and then fires it again to set the color.  The result is a valuable and high-quality piece, deserving the name: “made in Italy”.