An exquisitely carved set of East India John Company chessmen, circa 1850, carved in the Berhampur region of India. The pieces of one army stands atop black stained bases while the bases on the opposing army are left natural. the Kings stand 4-3/4”” high, with 3” long bases. Circa 1850

Offered here is an exquisitely carved set of East India John Company chessmen, circa 1850, most likely carved in the Berhampur region of India. The armies of both sides are mounted atop bases carved with a lotus petal motif. The pieces of one army stands atop black stained bases while the bases on the opposing army are left natural. the Kings stand 4-3/4”” high, with 3” long bases.

The chess set represents the British-equipped East India Company versus Native troops. The Kings are represented as elephants with covered howdahs, two royals within the howdah and the elephant handler astride the animal’s neck. The queens are similar but with open howdahs and holding umbrellas. The bishops are camels with Sabre-carrying riders, the similarly armed knights ride horses. The John Company rooks are fortified turrets with sepoys bearing red flags. The opposing rooks are ogee topped pavilions sporting flags. The white pawns are British sepoys wearing pearls around their necks and shouldering bayonet-mounted muskets. The opposing pawns are native troops holding spears.

These chess sets depict the extent of British colonialism before the Indian Mutiny of 1857 led to the imposition of direct rule from London. One side represents the East India Company (nicknamed “John”), while the other side represents Indian or troops under the command of local rulers. The East India pawns are Indian-born sepoys in British uniform, with pearls around their necks.

From about the end of the 18th century until the middle of the 19th century, elaborate sets were made for British dignitaries. These often show the East India Company soldiers on one side opposing the soldiers of an Indian ruler. They became known as John sets, the first India company being known as the John Company. By far the best of the sets were made in Berhampur. 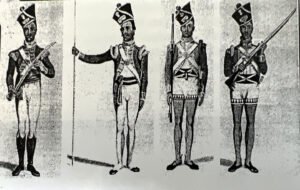 Unlike most Indian sets showing soldiers in uniform, the sepoys’ uniforms in John sets are based on uniforms provided by the East India company in 1759. The uniform, and in particular the headwear, derives from the shakos introduced into the British army in 1801 and continued in use until about 1830.

The beads around the necks of the sepoy pawns were typical of high caste sepoys from Bengal and we’re not found elsewhere in India. The costumes, and in particular the cummerbund bands of the pawns on the Indian side are in the fashion of the late 18 century and early 19 centuries. In John sets, the rooks are usually towers. While most of the pieces are of the same basic design in all John sets, several types of bishops and knights exist. Some are mounted camels and horses, the East India Company riders having top hats. In other sets, the bishops can be represented as mountain lions against buffaloes. In the most elaborate sets, the bishops are juggernaut carts. Elephants and occasionally rhinoceri are also used as bishops, adding to the general confusion as to the role of elephants and chariots. Except in the case of John sets, there are very few sets, whether made in Bengal or elsewhere in India, with the soldiers in the uniform of the East India company or of the British army, which finally took over from the east India company in 1861. Even in the case of sets, such as the Rajasthan sets, where the soldiers are shown on one side with what appear to be the British flag, they are not in British uniform and probably belong to another army allied to the British.