Field of Cloth of Gold Chess Set. Twentieth Century limited edition. The Kings stand an impressive 7.25″ tall with a 2-1/4” diameter base. The pieces depict the contestants and representatives of Henry VIII of England versus those representing Francis I of France.

The Rudolph Kammer Field of Cloth of Gold Chess Set is a Twentieth Century limited edition of 1000 Porcelain chess sets. The Kings stand an impressive 7.25″ tall with a 2-1/4” diameter base. The pieces depict the contestants and representatives of Henry VIII of England versus those representing Francis I of France. Each piece is signed on the base and is gilt-heightened and polychromed. This chess set was created to commemorate the Field of Cloth of Gold extravaganza. Like the Third Crusade chessmen, the Field of Cloth of Gold Porcelain Chess Pieces was conceived in France by the artist J. J. Van Gerdinge in the 20th century and produced in Germany. It is made of polychromed hard-paste porcelain. The elaborately dressed royal figures are not only based on historical personages, but they also actually look like them.

The king on the English side is Henry VIII, after a painting by Hans Holbein, the Flemish court painter. His queen is Jane Seymour, who wears a headdress called the Tutor Gable, which conceals her hair and frames her face. The remaining figures are troubadour bishops, falconer knights, and rooks as the Tower of London. The English Pawns are wearing navy blue hats, each resting a foot on a matching blue drum.

On the French side, wearing ruby-red clothing, stands King Francis I, adapted from a painting by Jean Clouet. The queen is his sister Margaret. Accompanying them are chancellors as bishops, rooks as the Stair Tower at Blois.  The French Pawns are wearing red hats decorated with a plume of white feathers, are sitting on beer kegs, and hold steins of libations. 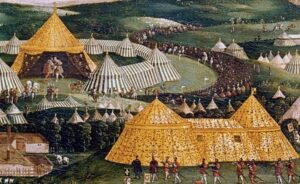 The Field of Cloth of Gold, also known as the Field of Golden Cloth (Le Camp du Drap d’Or) is the name given to a place in Balinghem, between Guînes in the English Pale of Calais and Ardres in France. Though now in France, Balinghem was at the time regarded as part of England. This caused some tensions between the English and French, as the latter preferred a location closer to the border, but topographical considerations proved the decisive factor. It was the site of the famous summit meeting that took place from 7 June to 24 June 1520, between King Henry VIII of England and King Francis I of France; arranged to increase the bond of friendship between the two monarchs following the Anglo-French treaty of 1514. It was a very expensive display of wealth by both kings. Each king tried to outshine the other, with dazzling tents and clothes, huge feasts, music, jousting and games. The tents and the costumes displayed so much cloth of gold, an expensive fabric woven with silk and gold thread, that the site of the meeting was named after it.

Francis I of France, hoping to become the next holy Roman Emperor, and in need of an ally, invited Henry to France for a tournament that became known as “The field of Cloth of Gold”. Hundreds of French acres were covered with tents that were used as temporary palaces and pavilions. The French and English armies engaged in friendly competitions: jousting, wrestling, archery, and horse

racing. Food, libation, and entertainment were presented to both armies. Henry challenged Francis to a wrestling match and was defeated by the French King. Henry then challenged Francis to an archery competition. Wrestling at the Field of the Cloth of Gold (tapestry, c. 1520). Francis I is shown top right, above an actual cloth of gold.

This meeting made a great impression on contemporaries, but its political results were very minor. While the carefully established rules of the tournament stated that the two kings would not compete against each other, Henry surprisingly challenged Francis in a wrestling match, but it turned sour for Henry when he quickly lost. An alliance was not Forged, however, and Francis never attained his goal of becoming the holy Roman Emperor.