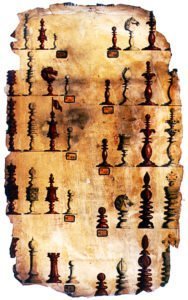 A fine set of Antique Floral Top Calvert chessmen, natural and Cochineal-stained, circa 1820. The King stands 3-1/4″ tall with a 1-1/4″ diameter base. The chessmen are housed in what appears to be its original Mahogany slide-top box.  The chessmen are in excellent condition with original cochineal red stain color still strong. Although this design is attributed to John Calvert, these sets were made by William Lund as well as John Jaques and Fischer, among others. Although unsigned, this particular set was produced by William Lund, 24 Fleet Street. This particular set was produced by William Lund, 24 Fleet Street. Although the chessmen are not stamped,  the unmistakable Lund Knight clearly marks this as a product of William Lund. These chessmen play and display best on a chessboard with 1-3/4″ or 1-7/8″ squares. The Chessboard shown is not included, but a suitable chessboard can be found elsewhere on this site.

This English Floral Selenus-Style (“Petal and Pistil”).design is an evolution of the older Selenus designs which were popular in the 17th and 18th centuries. A page from the 1860 Jaques Pattern Book, which was lost when their factory was destroyed during a WWII German V2 attack, shows similar sets produced by them during that period. The pattern book was discovered in the 1990s during a site excavation where the Jaques factory previously stood. These Calvert Petal and Pistil chessmen are classified as English Playing Sets. The design, which was subsequently produced by several other turners, is attributed to John Calvert who worked out of his shop at 189 Fleet St, London. John Calvert was a Master of the Worshipful Company of Turners (1819), and a leading chess maker in England from 1791 until his death in 1822, after which his widow Dorothy ran Calvert business until her death in 1840.