Offered here is a reproduction of the Grand Cigar Divan Chessmen in Boxwood and Gabon Ebony.  The chessmen were also known as the Strand Chessmen. The design was researched and reproduced by noted Chess set designer and historian, Frank Camaratta. The King stands an impressive 4-3/8″ tall with a 1-3/4″ diameter base.  These stately Grand Cigar Divan Chessmen are nicely weighted for ballast and stability. Each of the chess pieces is cushioned atop green baize base pads with the Kings resting atop gold-embossed Black English leather discs. The Strand Chessmen are part of the Frank Camaratta Signature Series and are limited to a total production run of only 50 sets. These historically significant chessmen are best played and displayed on a chessboard with 2-1/4″ or 2-3/8″ squares. This is a new set. For our extensive selection of chessboards and game timers, please look here.

Some History of The Strand Chessmen. 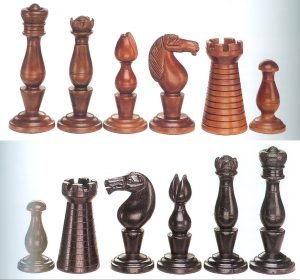 The Grand Cigar Chessmen were designed by John Jaques of London for play at Simpson’s Chess Divan on the Strand in London, which was the Mecca for all the World’s best chess players of the 19th Century. The Divan was often visited by such noted chess luminaries as Louis-Charles La Bourdonnais, Howard Staunton, Daniel Harrwitz, Wilhelm Steinitz, Joseph Blackburn, Johannes Zukertort and Emanuel Lasker. Even the legendary American World Champion Paul Morphy was known to have visited and played at the Grand Cigar Divan.

A photograph of the original Strand Chessmen is shown on the left.