Tired of the same boring variations on the Staunton design? Looking for something original – a new “TWIST” perhaps? Then here is a refreshing approach to brighten your Chessic landscape.  Meet the Hippocampus Spiral Chess Pieces. This set of chessmen features a 4.4″ King with a 1.785″ diameter base. The Chess pieces are heavily weighted. The Kings are treated with gold-embossed Black English leather base pads. The other pieces rest atop luxurious billiard cloth base pads. This set of chessmen is delivered with a second set of Queens to facilitate Pawn promotion, a feature pioneered by us in 1995. The chessmen are currently available in Boxwood and Kingwood. The image in the gallery shows the various wood options when available.

The Hippocampus Spiral Chess Pieces are the newest member of the Camaratta Signature Line of chessmen. With their graceful, spiraled columns, piece-to-piece design consistency and radical Knights, these chess pieces make a statement like no others can. Specifically designed by Frank Camaratta, the chessmen feature properly proportioned weighting and a stately Rook that projects the proper force for a major piece on the chessboard. Another unique feature, pioneered by us and used in all our creations, is the use of brass threaded studs and inserts to secure the Knight head to the base. Should the base ever become damaged, the Knight head, which is the most unique and expensive feature of a chess set, can be preserved. The pieces are designed for display and play on chessboard with 2-1/2” squares.  Looking for a suitable chessboard to accent your new heirloom? To view our extensive collection of new and antique chessboards, please click here. 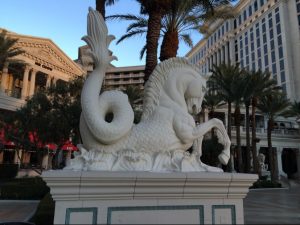 The Hippocampus, also Hippokampos, is a mythological creature shared by Phoenician, Roman and Greek mythology, though its name has a Greek origin. The mythic Hippocampus has been used as a heraldic emblem, particularly since the Renaissance, most often with maritime associations. In appearance, this heraldic seahorse is depicted as having the head and neck of a horse, the tail of a fish. In the Iliad, Homer describes Poseidon, driving a chariot drawn by brass-hoofed horses over the sea’s surface, and Apollonius of Rhodes describes the horse of Poseidon emerging from the sea and galloping across the Libyan sands. The Hippocampus is also a common image in Renaissance and post-renaissance art.

In Hellenistic and Roman imagery, Poseidon (or the Roman God Neptune) often drives a sea-chariot drawn by Hippocampi. Thus Hippocampi are shown in both ancient depictions and much more modern ones, such as in the waters of the 18th-century Trevi Fountain in Rome. A winged Hippocampus has been used as a symbol for Air France since its establishment in 1933 (inherited from its predecessor Air Orient). It appears today on the engine nacelles of Air France aircraft. Bronze Hippocampi appear in Dublin, Leinster, Ireland on lampposts next to a statue of Henry Grattan and on Grattan Bridge. For more background on the Mythical Hippocampus, click here.