The Janus Springer Chessmen, Natural and Black-stained Camel Bone with leather base pads. The King stands 4-3/4” tall, 1-1/2″ diameter base.

Offered here is the beautifully carved Janus Springer Chessmen. The design was conceived by Frank Camaratta and is loosely based on the German Selenus pattern but incorporating the rather enigmatic double-headed (Janus) Knight feature seen on some German and Danish chess sets produced around the end of the 18th Century. These magnificent chess pieces are crafted from Camel bone and are Natural and Black stained and rest atop white and black leather base pads. The King stands 4-3/4″ tall with a 1-1/2″ diameter base. The Janus Springer Chessmen are new. The chess pieces play and display best on a chessboard with 2-1/4″ or 2-3/8″ squares. For our extensive selection of antique, traditional and unique chessboards, please click here. 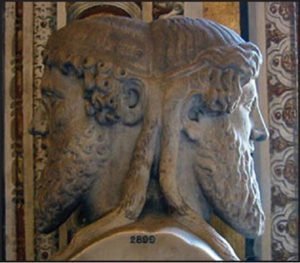 Janus, a lesser-known god, but arguably one of the most important. In Roman mythology, Janus was the god of doors, gates, and transitions. Janus represented the middle ground between both concrete and abstract dualities such as life/death, beginning/end, youth/adulthood, rural/urban, war/peace, and barbarism/civilization. . He is usually depicted as having two faces, since he looks to the future and to the past. The ancient Greeks had no equivalent to Janus, whom the Romans claimed as distinctively their own.

Janus was known as the initiator of human life, transformations between stages of life, and shifts from one historical era to another. Ancient Romans believed Janus ruled over life events such as weddings, births, and deaths.

According to Roman mythology, Janus was present at the beginning of the world. As the god of gates, Janus guarded the gates of heaven and held access to heaven and other gods. For this reason, there is evidence that Janus was worshipped long before many of the other Roman gods, dating all the way back to the time of Romulus (the founder and first ruler of Rome). As the Roman god of beginnings and transitions, Janus is the namesake of January, the first month of a new year.

Why the Janus Springer Chessmen?

What is unusual about the god Janus is his iconic image. As the god of transitions and dualities, Janus is portrayed with two faces—one facing the past, and one facing the future. He also holds a key in his right hand, which symbolizes his protection of doors, gates, thresholds, and other separations or openings between spatial boundaries. Hence the symbolism of the Knights in our new Janus Springer Chessmen, protecting the gates of the Chessic Fortress represented by the two Rooks.