A set of unweighted Boxwood and Ebony Jaques Paulsen Chessmen in its original numbered Carton Pierre Box Entered No. 2703. The King stands 3-1/2″ with a 1-5/8″ diameter base and is inscribed “Jaques London” on the rim. Circa 1853

Jaques Chessmen in Its Numbered Carton Pierre Box, circa 1853

Offered here is a set of Jaques Chessmen in its Numbered Carton Pierre Box with a yellow label bearing the Entered No. 2703. The King stands 8.9 cm. The Boxwood and Ebony pieces are unweighted and felted. The White King’s base is inscribed “Jaques London” on the rim and the Kingside Rooks and Knights bear the red King’s crown stamp. The Knights are very finely carved with a very attractive serpentine silhouette. This has been identified as the Paulsen style in the Camaratta Codex. The black Knights are ebony, indicating a later Paulsen set, circa 1853. The set is housed in its original, expertly restored Carton Pierre casket, lined in burgundy velvet, with the original yellow numbered label. 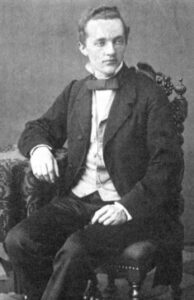 Louis Paulsen was born at Blumberg, in Germany, on June 15th, 1833, and at an early age was taught to play chess by his father, Dr. Carl Paulsen. In 1854 he emigrated to America, and with his brother Ernest, established a business at Dubuque, in Iowa.

The Paulsen family owned a potato farm in native Nassengrund, Germany.  Because of the potato blight that devasted the European crops in the 1840s and 50s, Louis, along with his brother Ernst and sister Amalie, emigrated to the U.S., settling in Dubuque, Iowa, where they operated a distillery, raised tobacco and made cigars from 1854 to 1861. The scientific cultivation of potatoes was his famiy business.

Louis Paulsen was a contemporary of Paul Morphy. In 1857 he took part in the First American Congress, finishing second behind the American Prodigy Paul Morphy.  Morphy and Paulsen were early masters of blindfold chess, having played as many as 10 simultaneous blindfold games.

By 1880 his tournament results deteriorated. Louis Paulsen died in Germany on July 19th, 1891