Offered here is a Reproduction of the Jaques Club Size Morphy Chessmen, created by noted Staunton authority, Frank Camaratta. It is an exact rendition of the Jaques Club Size Morphy Chessmen as they appeared toward the latter part of 1850. This is a weighted full Club size Staunton pattern chess set, featuring a 4-3/8″ King with a 2-0″ diameter base. Each of the chess pieces rests atop green English baize base pads. This Club Size Morphy Chessmen reproduction is accurate – right down to the incorrectly printed green registration discs under each of the chess pieces and the impression of a  king’s crown on the summits of one Knight and Rook from each army to designate the Kingside piece.

The set being offered is crafted from antiqued Boxwood and pure Gabon Ebony. The Chessmen are new. Each set consists of 34 Chessmen, including four Queens to facilitate Pawn Promotion, now a standard that was introduced by Mr. Camaratta over 20 years ago. Note the masterful workmanship of the Knights, which are derived from the noble steeds whose visages are captured in the Parthenon frieze (expropriated between 1801 and 1812 by Thomas Bruce, 7th Lord of Elgin and since referred to as the Elgin Marbles). This distinctive, finely detailed Knight head is the hallmark of a true Staunton design.

The chessmen are accompanied by a correct Facsimile green Manufacturer’s label. A premium Mahogany storage box and suitable chessboard are available upon request. These Club Size Morphy chessmen play and display best on a chessboard with 2-1/2″ squares. Suitable chessboards for these chess pieces can be found here. For more on the background of the John Jaques company, click here. For a history of the Staunton Chessmen, click here.

A Bit of History 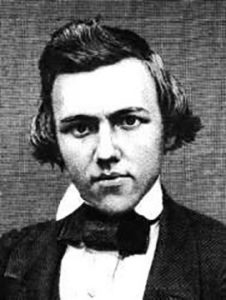 Paul Charles Morphy  was born on June 22, 1837 in New Orleans to a wealthy and distinguished family. . His father, Alonzo Michael Morphy, a lawyer, served as a Louisiana state legislator, attorney general, and a Louisiana State Supreme Court Justice. Alonzo, who held Spanish nationality, was of Spanish, Portuguese, and Irish ancestry. Morphy’s mother, Louise Thérèse Félicité Thelcide Le Carpentier, was the musically talented daughter of a prominent French Creole family. Morphy grew up in an atmosphere of genteel civility and culture where chess and music were the typical highlights of a Sunday home gathering.

According to his uncle, Ernest Morphy, no one formally taught Morphy how to play chess; rather, Morphy learned on his own as a young child simply from watching others play. After silently watching a lengthy game between Ernest and Alonzo, which they abandoned as drawn, young Paul surprised them by stating that Ernest should have won. His father and uncle had not realized that Paul knew the moves, let alone any chess strategy. They were even more surprised when Paul proved his claim by resetting the pieces and demonstrating the win his uncle had missed.

After 1850, Morphy did not play much chess for a long time. Studying diligently, he graduated from Spring Hill College in Mobile, Alabama, in 1854. He then stayed on an extra year, studying mathematics and philosophy. He was awarded an A.M. degree with the highest honors in May 1855. He studied law at the University of Louisiana (now Tulane University) and received an L.L.B. degree on April 7, 1857.

Morphy received an invitation to participate in the First American Chess Congress, to be held in New York from October 6-November 10, 1857. He defeated each of his rivals,and was declared the chess champion of the United States. Up to this time, Morphy was not well-known or highly regarded in Europe. Morphy traveled to Europe to play the esteemed Howard Staunton and other chess greats. After defeating Europe’s best players, he unsuccessfully made numerous attempts at setting up a match with Staunton.

Morphy returned home and declared himself retired from the game and gave up public competition. Unfortunately, his embryonic law career was disrupted in 1861 by the outbreak of the American Civil War. Despite his retirement from chess in 1860, Morphy was still generally considered world champion until Steinitz was awarded that honor after his victory at the 1873 Vienna Tournament.

On the afternoon of July 10, 1884, Morphy was found dead in his bathtub in New Orleans at the age of 47. According to the autopsy, Morphy had suffered a stroke brought on by entering cold water after a long walk in the midday heat. The Morphy mansion, sold by the family in 1891, became the site of the well-known restaurant Brennan’s. A more complete summary of the life and triumphs of Paul Morphy can be found here.