A set of early Boxwood and Ebony Jaques Marshall Chessmen, Tournament Size, 3.5″ King with a 1.7″ base. The pieces are heavily weighted and felted, with “Jaques London” inscribed on the base of both Kings. Circa 1910.

A set of Boxwood and Ebony Jaques Marshall Tournament Chessmen. The pieces are heavily weighted and felted, with “Jaques London” inscribed very faintly on the base of both Kings. A very attractive set with beautifully carved early Marshall Knights with drilled out pupils. The King stands 3.5″ tall with a 1.7″ diameter base. These are Jaques Marshall Tournament Chessmen. The chessmen are housed in their original Mahogany hinge-top box with its original green manufacturer’s label. The chessmen and box are in excellent condition and have a very pleasant patina. The set is circa 1910. These Jaques Tournament chessmen play and display best on a chessboard with 2-1/2″ squares. A chessboard is not included with this set of pieces, but a suitable new or antique chessboard can be found here. 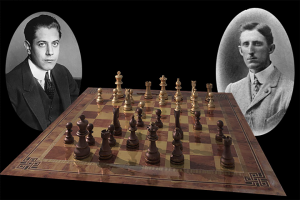