A set of Jaques Tournament Broadbent Chessmen, Boxwood and Ebony. The King stands 3.5″ tall with a 1.7″ base, The pieces are weighted and rest atop green baize base pads. “Jaques London” is stamped on both Kings. The pieces are housed in their original box with Label. 1930s

Offered here is an original set of Jaques Tournament Broadbent Chessmen. This style of Jaques Chessmen  is named after a Jaques Club-size set that was awarded to South African born Reginald Joseph Broadbent. The pieces are crafted from English Boxwood and Ebony. Each of the chessmen is heavily weighted, with “Jaques London” inscribed on the base of both Kings. The chess pieces rest atop green English baize base pads.  The King stands 3.5″ tall with a 1.7″ diameter base. These are commonly referred to as Jaques Tournament Size chessmen and is the size used for most Nationally and Internationally sanctioned tournaments.

This is a very attractive set with the beautifully carved Broadbent Knights. These Jaques Broadbent chessmen are housed in their original Mahogany hinge-top box with its green manufacturer’s label. The chessmen are in excellent condition. The set is circa 1930. The chessboard shown is not included.. These Jaques Tournament Broadbent Chessmen play and display best on a chessboard with standard 2-1/4″ squares.  For a complete selection of our finest new and antique chessboards and game timers, click here.  For more on the background of the John Jaques company, click here. For a history of the Staunton Chessmen, click here.

Who is Reginald Joseph Broadbent? 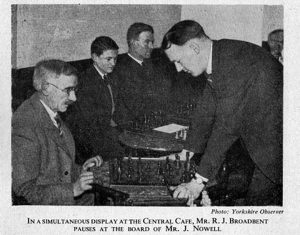 Reginald Broadbent was the Northern Counties Champion 1933-46, the Surrey champion 1947, and the British Isles champion in 1948 and 1950. He played for England in international matches against Holland, Czechoslovakia, Yugoslavia and Australia, and has taken part in two international tournaments: London 1946, and the Staunton Memorial Tournament 1951.