A set of elaborately carved set of Large Antique Burmese Chessmen, Type III, natural and red-stained. The King stands an impressive 4-1/2” tall. The chessmen and box are in excellent condition with no repairs or replacements. The red stain is still strong and vibrant. The set was produced in Canton around 1820 and most likely sold in Macao. The Type III Burmese Chessmen are characterized by a carved face on the headpieces of all the Royal chessmen – the Kings, Queens and Bishops. This feature is found on the largest Burmese sets with King heights 4-1/2″ and larger. The set is housed in an elaborately carved hinge-top wooden box with an Asian motif which complements the carving on the chess pieces. 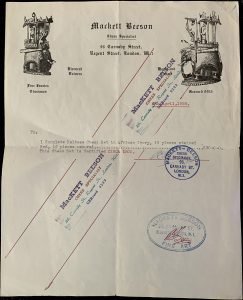 The chessmen are accompanied by the original, hand-typed and signed letter from famed British dealer and author, Mackett Beeson, dated 4th of April. 1959, transferring ownership of the chessmen to the new owner. The antique Tanner chess timer shown is not included. A wide selection of suitable chessboard for these exquisite chess pieces can be found here.