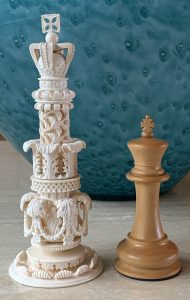 Offered here is a very large, elaborately carved, set of Kashmir Style Chessmen. The pieces are crafted from 20,000 year-old Mammoth ivory, Natural and Red-stained . The King stands a statuesque 7-1/4” tall with a 2-3/4″ diameter base. This set of Kashmir Chessmen is somewhat similar to one from the Paris Exhibition of 1867. A near-identical set is shown in the reference book “Chessmen For Collectors” by Victor Keats, figure 27. Keats describes these as “Indian Ivory carved Kashmir chessmen”. These chessmen were crafted in the workshop of renowned sculptor and Mammoth Ivory carver, Oleg Raikis and date to 2004. The chessmen are in as new condition.  An image comparing the size of this King with a full Club-Size 4-3/8″ tall Staunton King is shown in the gallery. For our extensive selection of antique, traditional and unique chessboards, please click here.

British Researcher Michael Mark posits that Kashmir Style Chessmen of this type were carved in Murshidabad, India, a town in the Indian state of West Bengal, located on the eastern bank of the Hooghly River, around the mid-19th Century. The Sepoy Pawns and Rooks in sets of this type have features very similar to sets produced by the East Indian John Company, suggesting that they were all obtained from the same sources. These intricately carved and very complex Kashmir Style chessmen are thought to have been inspired by drawings of chess sets published in London in 1824, by Jacob Petit. His drawings appear to have been adopted by the highly experienced Indian and Kashmiri craftsmen who created Victorian inspired ivory chess sets that are considered among the most detailed ever made.