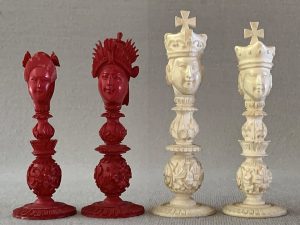 The Type III Burmese Chessmen will have a face carved on the Royal pieces (Kings, Queens, Bishops) and are normally found on sets with King heights over 4-1/2″. The Type II Burmese Chessmen will have a face carved on the Bishops only and are normally found on Burmese sets with King heights around 4″. Type I Burmese chessmen tend to be the smallest, and the chessmen will have faceless headpieces. The Type IV chessmen, like the set offered here, are often referred to as Macao Chessmen, with fully carved heads atop all the chessmen except the Rooks. Macao Chess sets normally have King heights between 3-1/2″ and 3-3/4″. Sets with King heights over 4″,  like the Large Macao Antique Chessmen offered here, are very unusual and quite rare. Burmese chess sets were made for the European Market and probably sold in Macao which was the only place in China where Europeans were allowed to visit prior to the Opium Wars of the 1840s. Circa 1840. The antique chessboard shown is not included, but a suitable chessboard can be found elsewhere on this site.

Comparable sets of chessmen were made in the Vizagapatam region of India, apparently to compete with the Chinese for the lucrative European market. The Indian ivory craft industry also produced Sets of the Type I through Type IV design in various sizes. Below are examples of competitive Type I and Type IV ivory style Macao Chessmen produced in India.