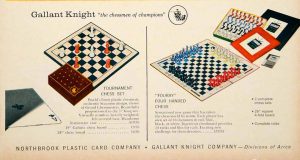 Offered here is a set of Large Vintage Black and Ivory colored Gallant Knight Plastic Chessmen. This is an Authentic Staunton design. The chess pieces are weighted and felted.  The set has a large 4-7/8″ King with a 2″ diameter base. The Gallant Knight Plastic Chessmen are housed in a black leatherette covered hinge-top cardboard box. The chessmen are in excellent condition. The box is somewhat worn, but in serviceable condition. These large Club-size sets were produced around 1950. These King-size chess pieces require a chessboard with 2-1/2″ or 2-5/8″ squares. To view our extensive selection of new and antique chessboards, look here.