Lot #774. Marshall Staunton Chessmen by The House of Staunton

A reproduction of the Jaques Marshall Staunton Chessmen. Each of the chess pieces is heavily weighted and wear green English baize base pads. The chessmen are crafted from Boxwood and Rosewood. Included is a Premium Mahogany storage box. The King stands 4-0″ tall with a 1-7/8″ base. New

Offered here is a Reproduction of the Jaques Small Club Size Marshall Staunton Chessmen. The set being offered is crafted from Boxwood and Rosewood. It is an exact rendition of the Jaques Marshall Chessmen as they appeared between 1900 and around 1910. This is a heavily weighted set of chess pieces, featuring a 4-0″ King with a 1-7/8″ diameter base. The Kingside Knights and Rooks are stamped with the traditional red King’s crown signifying the Kingside piece. Each of the chessmen rests atop green English baize base pads. The Kings sport burgundy leather base pads with The House of Staunton imprinted in gold leaf.

The chess set is as new. The chess pieces are housed in the premium Mahogany storage box shown is. The Marshall Staunton Chessmen play and display best on a chessboard with 2-3/8″ or 2-1/2″ squares. Suitable chessboards for these chess pieces can be found here. 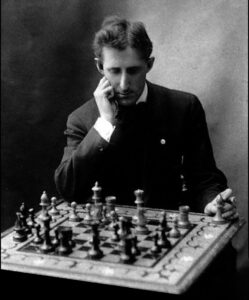