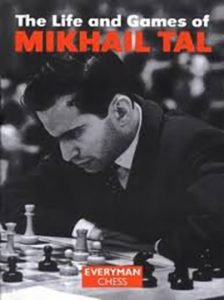 The House of Staunton has reproduced this legendary chess set used in many major chess tournaments in the Soviet Union in the 1950s and 1960. This is an accurate reproduction of the set of chess pieces pictured with the enigmatic Soviet Grandmaster and former World Champion Mikhail Tahl on the cover of the book The Life and Games of Mikhail Tal by Everyman Chess.

The King stands3-7/8” tall with a 1-1/2” base. The chess pieces are heavily weighted and rest atop cushions of green English baize. Like most old school Soviet chessmen, the original chessmen were Natural and Black stained Boxwood with alternate colored finials resting atop the Kings, Queens and Bishops. We have meticulously reproduced those features. This set of chessmen includes an extra pair of Queens to assist during Pawn Promotion, a feature pioneered by us in 1995 and has now become the standard praxis of chess set producers the World over.

The reproduction Mikhail Tahl Commemorative Chessmen are available in Natural and Black or Red stained Boxwood, Antiqued and Black Lacquered Boxwood, and Lacquered Boxwood and Anjan wood. Please indicate your preference when placing an order. The chessmen are new. Mikhail Tahl is now just a memory, but his brilliant games will continue to enrich the chess literature. These reproduction chessmen are a fitting tribute to his memory. The gallery contains several images of the World’s leading players with the Mikhail Tahl Commemorative Chessmen. Also shown is diagrammed position in the Tahl – Krogius game from the 1962 Soviet Championships, which was used the cover photograph of the Everyman Chess Book. The chessmen play and display best on a chessboard with 2-1/4 – 2-3/8″ squares. The chessboard shown is not included, but a suitable new or antique chessboard can be found elsewhere on our site. 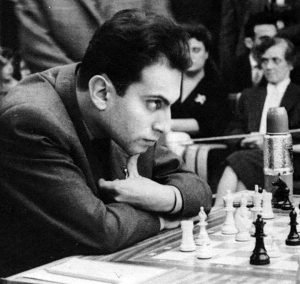 Mikhail Tahl, born in Riga, Republic of Latvia, into a Jewish family, on 9 November 1936, was a Soviet Latvian chess player and the eighth World Chess Champion. From the very beginning of his life, Tahl suffered from ill health. He learned to read at the age of three and was allowed to start university studies while only fifteen. At the age of eight, he learned to play chess while watching his father.

He became a Soviet Master in 1954. Tahl graduated in Literature from the University of Latvia, and taught school in Riga for a time in his early twenties. Tahl won a strong tournament at Zürich, 1959 and the Candidates’ Tournament, Yugoslavia 1959, winning with 20/28 points, ahead of Paul Keres, Tigran Petrosian, former World Champion Vassily Smyslov and the sixteen-year-old Bobby Fischer.

In 1960, at the age of 23, Tahl defeated Mikhail Botvinnik in a World Championship match, held in Moscow, by 12½–8½ (six wins, two losses, and thirteen draws), making him the youngest-ever World. Botvinnik won the return match against Tahl in 1961 by 13–8 (ten wins to five, with six draws). Tahl’s chronic kidney problems contributed to his defeat. His doctors in Riga advised that he should postpone the match for health reasons.

Widely regarded as a creative genius and one of the greatest attacking players of all time, Tahl played in a daring, tactical style.  Known as “The Magician from Riga”, Tahl was the archetype of the attacking player, developing an extremely powerful and imaginative style of play. His approach over the board was very pragmatic – in that respect, he is a protégées of ex-world champion Emanuel Lasker. He often sacrificed material for the initiative, He created vast complications many grandmasters found impossible to solve over-the-board. In addition, He held the record for the longest unbeaten streak in competitive chess history with 95 games (46 wins, 49 draws) between 23 October 1973 and 16 October 1974. Tahl’s highest Elo rating was 2705, achieved in 1980. His highest Historical Chessmetrics Rating was 2799, in September 1960.

Tahl was a powerful Blitz player. In 1970, he took second place to Fischer, in the strongest blitz tournament ever held at that time in Herceg Novi, Yugoslavia. In 1988, at the age of 51, he won the second official World Blitz Championship at Saint John, ahead of Kasparov, the reigning world champion, and ex-champion Anatoly Karpov. On 28 May 1992, at the Moscow blitz tournament (which he left the hospital to play), he defeated Kasparov. He died one month later on June 28, 1992.