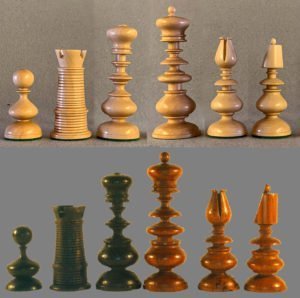 Offered here is a faithful reproduction of the Old Windsor Castle Chessmen in Boxwood and Gabon Ebony.  The design was researched and reproduced by Frank Camaratta. The King stands an impressive 4-1/4″ tall with a 1-1/2″ diameter base.  These stately Old Windsor Castle Chess pieces are nicely weighted for ballast and stability. Each of the chess pieces is cushioned atop green baize base pads with the Kings resting atop gold-embossed Black English leather discs. This set of chessmen includes an extra pair of Queens to assist during Pawn Promotion, a feature pioneered by us in 1995. A comparison of our reproduction (top) with the original Chess pieces is shown here.

The Old Windsor Castle Chessmen are part of the Frank Camaratta Signature Series and are limited to a total production run of only 50 sets. These historically significant chessmen are best played and displayed on a chessboard with 2-1/4″ squares. The antique folding chessboard shown is not included. For our extensive selection of chessboards and game timers, please look here. 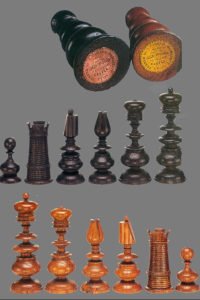 All that is known about this set of chess pieces is that it was crafted as a souvenir set of chessmen by a turner from Eton, I. Parker, using the old oak from the St. George Chapel at Windsor Castle, which was under restoration in the 1820s. Parker wore the title Turner to Her Majesty the Queen. A photograph of the paper label affixed to the underside of Old Windsor Castle King, as well as the original chess pieces, is shown on the left.

According to several Wikipedia articles, St. George’s Chapel  as Windsor Castle suffered a great deal of destruction during the English Civil War. Parliamentary forces broke into and plundered the chapel and treasury on 23 October 1642. Further pillage occurred in 1643 when the fifteenth-century chapter house was destroyed, lead was stripped off the chapel roofs. George IV came to the throne in 1820 intending to restore the damage to Windsor Castle and create a set of royal palaces that reflected his wealth and influence as the ruler of Britain.

George persuaded Parliament to vote him £300,000 for restoration (£245 million in 2008 terms). Under the guidance of George’s advisor, Charles Long, the architect Jeffry Wyatville was selected, and work commenced in 1824. The work was unfinished at the time of George IV’s death in 1830, but was broadly completed in 1840. The total expenditure on the castle had soared to the colossal sum of over one million pounds (£817 million in 2008 terms) by the end of the project.