A reproduction of the Moscow 1935 International Tournament, Natural and Black or red stained Boxwood. The King is equivalent to a Normal 4.0” tall  Staunton Set with a conventional Formeé cross finial, The King has a 1-3/4” diameter base. The Bishops lack miter cuts. Recreated by Frank Camaratta 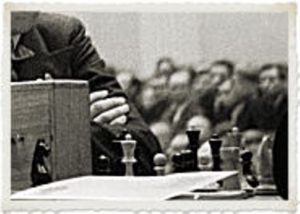 The reproduction of the Moscow 1935 Chessmen have now joined the Camaratta Signature Line. These pieces are based on the chessmen memorialized in images of the game between Salo Flohr and Mikhail Botvinnik in the 1935 Moscow International Tournament. Each set of the Reproduction Moscow1935 Chessmen reproduction has a  tournament-size King, equivalent to a Normal 4.0” tall  Staunton Set with a conventional Formeé cross finial, The King has a 1-3/4” diameter base. The set is available in Natural and Black or Red-Stained Boxwood. Typical of many Soviet era chessmen designs, the Bishops lack miter cuts.  The stately Rook projects the proper stature for a major piece on the chessboard. The Knight is particularly well carved,  a finely balanced design that is aggressive, but not visually overwhelming. The set comes standard with the elongated Eastern teardrop-style pointed King’s finial which belie its true comparative height. Also included are an extra pair of Queens to facilitate Pawn Promotion, a feature pioneered by us in 1995. The Reproduction Moscow 1935 Chessmen are designed for play or display on chessboard with 2-1/4” squares. Several suitable chessboards are available and can be found here

Salo Flohr (Czechoslovakia) was internationally renowned and considered a world championship contender. Later, Flohr would be in the inaugural group to receive the grandmaster title when it was introduced by FIDE in 1950. Mikhail Botvinnik (Soviet Union) was known as a rising star at age 24 and two years earlier had drawn a match with Flohr. He would later become world champion in 1948.

Emanuel Lasker (Germany) and José Raúl Capablanca (Cuba) were former world champions. At age 66, Lasker was undefeated, beating Capablanca in their individual game and finishing third, a half point ahead of Capablanca in fourth place. Reuben Fine hailed Lasker’s result at age 66 as “a biological miracle.”

About the House of Staunton.