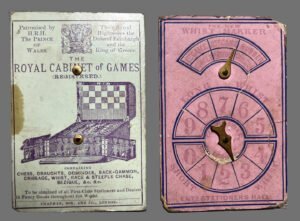 An example of the late Victorian Royal Cabinet of Games by Chapman, Son & Co., London EC. The compendium consists of a complete set of Staunton Boxwood and Ebony Chessmen with a 2.4″ x 1.0″ King, set in the opening doors of a Games Compendium measuring 13″ by 8.5″ by 7″. Also included is a complete set of double-6 bone dominoes and two lift-out trays, 30 wooden checkers which can be used for American Checkers, Continental Draughts, Turkish Draughts and Backgammon. A set of six bone Dice, two wooden shakers, a Cribbage board and two Bone Cribbage pegs occupy the trays. A paper-covered game board with red and black checkerboard squares on one side and a Backgammon board on the obverse is included but is likely not original to the Royal Games Cabinet. A selection of miscellaneous card games and scoring apparatus and in the cabinet, some likely not original to the compendium. It is missing the board and lead horses for a race game. An inlaid brass plaque engraved “Royal Cabinet of Games” is prominent when the doors are opened. The compendium cabinet is in excellent condition for its age. These were produced by Chapman, Son & Co. and marketed by the firm of John Jaques & Son, Ltd, London, around 1900.

Although unmarked, this Royal Cabinet of Games by Chapman Son & Co. was produced in the latter half of the 19th century and early 20th Century. This games compendium was sold by firms such as F. H. Ayres and John Jaques & Son, Ltd. F.H. Ayres was an English sports and Games manufacturer and retailer dating back to 1810, doing business in Aldersgate in the city of London. It is known from various ads that they produced and sold products of various styles. A report in the June, 1895 issue of Strand Magazine, by William G. Fitzgerald, is an interesting overview of the company business. Jaques is an English sports and Games manufacturer dating back to 1795, located at Hatton Garden in the city of London. It is well known that Jaques was the sole manufacturer of the revolutionary Staunton chessmen and produced other high-quality Chess sets of various styles, along with other recreational games and toys. A brief history of the John Jaques company and the Staunton chessmen can be found here and here.