Offered here is a set of the limited production 1849 Selene Imperial Staunton Chessmen, This is an exact reproduction of the original Club-Size Nathaniel Cooke 1849 Staunton Chessmen. The unique design feature of this set of chess pieces is the Knight, which is an exact replica of the horse pulling Selene’s Chariot taken from the East Pediment of the Greek Parthenon. This particular sculpture was the inspiration for the Knights used in original Staunton design. This is a full Club-size set, featuring a 4-3/8″ King with a 1-7/8″ diameter base. The chessmen are crafted from Boxwood and Ebony and are very heavily weighted using our patented Tungsten weighting process. This process was developed to prevent your Ebony chessmen from ever cracking – a common problem with weighted Ebony chess pieces. Each set of the Cooke 1849 Staunton chessmen is cushioned atop gold-embossed black English leather base pads. This set of chessmen includes an extra pair of Queens to assist during Pawn Promotion, a feature pioneered by us in 1995.

The box itself features an accurate facsimile of the small green Staunton Chessmen label on the underside of the lid. A facsimile hand-signed manufacturer’s label is affixed to the underside of the box. The custom-made solid wood box is a reproduction of the early Jaques Mahogany boxes and features brass stop-hinges and a  semi-mortise lock and key set. The reproduction Jaques chessboard shown is not included, but may be purchased separately. The chess pieces require a chessboard with 2-1/2″ squares. A reproduction of the chessboard that was offered by Jaques in 1849 is also available. To view this board, along with our extensive collection of new and antique chessboards, please click here. Some useful information on collecting the original Jaques Staunton chessmen can be found by clicking here. For a brief history of the John Jaques Company and the Staunton Chessmen, click here.

The Staunton pattern chess pieces are today the World standard for serious and casual play. The relatively low production cost brought chess to the masses and did much to popularize the game.  In 1849, this new design was revolutionary. It was simplicity and elegance. The original design looks as modern today as it did upon its introduction over 166 years ago. However, this upstart met with some resistance from the established Chess Clubs and many players. Here are some insights into the ideas behind this new paradigm.

The design of the Staunton Chessmen was registered by Nathaniel Cooke in March of 1849. Sole authorization to produce the chessmen was given to the Firm of John Jaques of London. Inspiration for the Design of the Staunton Knights was derived from the Elgin Marbles, whose visages of the noble steeds graced the East Pediment of the Greek Parthenon which stood atop the Acropolis. The distinctive, finely detailed Knight design drew heavily upon the horse seen pulling the Moon Goddess Selene as its inspiration. This Knight is the hallmark of the Staunton design.  Over time, whether due to the demands of the market to mass produce chess sets cheaply, lack of carving skill, or simply ignorance of their true design origins, Knights in contemporary Staunton chess sets are often artistically challenged and a far cry from the original design intent.

The Staunton Bishop’s wide, open-mitered headpiece was an abstract representation of a flame (tongues of fire), the ecclesiastical representation for Wisdom, which in Christianity represents enlightenment imparted by the Holy Spirit. Contemporary Bishop designs have lost that original religious connection. The Rook design is self-evident. The Kings and Queens are represented by their respective headpieces resting plush pillows siting atop gracefully curved columns. The Pawn is said to represent the Freemason’s Square and Compass, a rather obscure reference and one which is open to some debate. 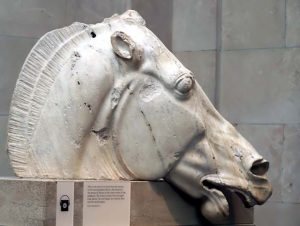 The Parthenon Marbles, also known as the Elgin Marbles is a collection of classical Greek marble sculptures (mostly by Phidias and his assistants), inscriptions and architectural members that originally were part of the Parthenon and other buildings on the Acropolis of Athens. The fascinating story behind these marble sculptures is rooted in Greek Mythology. On the far right corner of the East Pediment there is a marble sculpture of the head of a horse spilling over the beam and known as the Head of the Horse of Selene’s Chariot. The horse was part of a larger ensemble of horses pulling a chariot.  The chariot represented the moon (Selene) which the horses, now exhausted, were pulling into the sea after racing across the night sky. The left corner of the pediment contained a second set of horses and chariot representing the sun rising out of the sea. The sculptor has masterfully captured the weariness of the horse in its flaring nostrils, bulging eyes, and drooping jaw.

There is more to this captivating story. Thomas Bruce, the 7th Earl of Elgin, obtained a controversial permit from the Ottoman authorities to remove pieces of the Friezes from the Parthenon while serving as the British ambassador to the Ottoman Empire from 1799 to 1803. From 1801 to 1812, Elgin’s agents removed about half of the surviving sculptures of the Parthenon as well as some other choice sculptures. The Marbles were then transported by sea to Britain. Greece has demanded that the Marbles be returned to their proper place and critics have compared Elgin’s actions to vandalism or looting.