A reproduction of the famous St. Petersburg 1914 Chessmen. The King stands 4-1/8” tall by 1-1/2”, which was won by Emanuel Lasker. The chessmen are available in Natural and Antiqued Boxwood an Anjan wood. 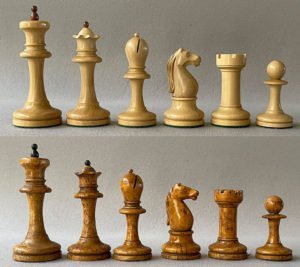 The House of Staunton has reproduced this legendary set of St. Petersburg 1914 chessmen from the famous St. Petersburg tournament of 1914, which was won by Emanuel Lasker after a five-year hiatus from competitive chess. The King stands 4-1/8” tall with a 1-1/2” diameter base. The chess pieces are nicely weighted and rest atop green English baize base pads. An unusual feature of this set is the Bishop’s miter cut, which is asymmetric. The reproduction is the most accurate ever made, based on an actual set of chess pieces. The images in the Gallery show the original chessmen and the reproductions for comparison. The St. Petersburg 1914 Chessmen are available in Natural or Antiqued and Red-stained or Ebonized Boxwood, as well as Anjan wood. Please indicate your preference when placing an order.

This set of chessmen includes an extra pair of Queens to assist during Pawn Promotion, a feature pioneered by us in 1995. The chessmen are new. The St. Petersburg 1914 Chessmen play and display best on a chessboard with 2-1/4″ squares. The chessboard shown is not included, but a suitable new or antique chessboard, as well as game timers, can be found elsewhere on our site. 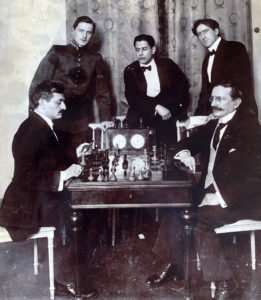 The St. Petersburg 1914 chess tournament celebrated the tenth anniversary of the St. Petersburg Chess Society. They intended to invite the present top twenty chess players, with world champion Emanuel Lasker, challenger José Raúl Capablanca, and the two winners of the All-Russian Masters’ Tournament 1913/14 (Alexander Alekhine and Aron Nimzowitsch).  Several players could not accept due to tensions of Russia with Austria-Hungary in the year 1914. In addition, the top players from Germany, France, United Kingdom, United States, Cuba, and Russian Empire were accepted.

The main event lasted from 21 April to 22 May 1914. The games were played at the St. Petersburg Chess Club in the afternoon and evening. The time control was 30 moves in 2 hours, followed by 22 moves in 1½ hours and 15 moves per hour for the rest of the game.

The preliminary rounds were held as a single round-robin tournament, with the top five places qualifying for the final. Capablanca easily won the preliminaries by 1-1/2 points over Lasker. The great surprise was the elimination of Akiba Rubinstein.

The final Round was a double-round tournament among the five qualifying players, Capablanca, Lasker, Alekhine, Tarrasch and Marshall. . Since the results of the preliminaries carried over into the finals, Capablanca, with a 1½-point lead, was a heavy favorite to win the tournament.

In the 19th round, Lasker won his game against Capablanca. Capablanca, intent on avoiding complications, played too passively and was routed by Lasker. In the following round, Capablanca, still suffering from his loss to Lasker, lost as White from a superior position against Tarrasch. This allowed Lasker, who scored an impressive 7-1, overtook Capablanca, winning the tournament by a half point. Tarrasch wrote his famous book on this tournament (in German), which was not translated into English until 1993.

For a more detailed report on the 1914 Saint Petersburg Tournament, click here.