Offered here is an accurate reproduction of The Sutton Coldfield Monarch Chessmen, in natural and Ebonized Boxwood. The King stands 4-3/8″ tall with a 1-7/8″ diameter base. These graceful pieces are heavily weighted and rest atop green baize base pads. The set of chessmen includes an extra pair of Queens to facilitate Pawn promotion, a feature pioneered by us over 25 years ago.  The Sutton Coldfield Monarch chessmen were designed by Baruch H. Wood and offered for sale to the general public in the Fall of 1937. The original chessmen were manufactured in France and imported by Sutton Coldfield. These sets were also available in ivory. The chess pieces shown are displayed on a chessboard with 2-1/4″ squares, which is clearly too small for these stately chessmen. The chessmen play and display best on a chessboard with 2-1/2″ squares. The chessboard shown is not included, but a suitable new or antique chessboard can be found elsewhere on our site. 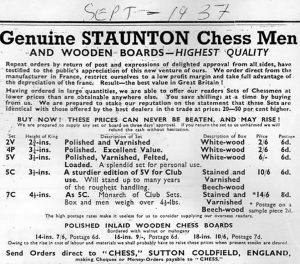 In the September and October, 1937 issue of Baruch Howard Wood’s publication “Chess”, there appeared advertisements for a new, high quality, Staunton chessmen. Shortly thereafter, on May 16, 1939, The Jaques Company issued an injunction to restrain “Chess” from passing off sets of chessman not of Jaques’ manufacture as “Genuine Staunton Chessmen” or as simply “Staunton Chessmen”. The suit was actually more about using the words “Staunton” and “Genuine Staunton” than it was about using the words “Staunton pattern”. Jaques claimed that the words “Staunton” and “Genuine Staunton” meant that the sets were, in fact, made by them. There is some validity to that claim. In the UK, even today, Staunton chessmen were understood to be Jaques chessmen. All others were Staunton type chessmen. The lawsuit concluded with Jaques having sole right to use “Genuine Staunton” but anyone could use “Staunton” or “Staunton Pattern”. The law suit was originally found in Jaques favor, but “Chess” won on Appeal. This became known as The Chess lawsuit of a Century.