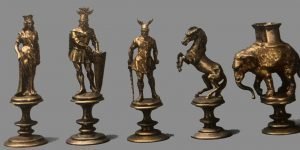 Offered here is a set of hand-carved ivory figural Chess Pieces dating from around 1900. This Zimmerman Style Chess Set draws its inspiration from a cast iron set crafted by blacksmith E.G. Zimmermann from Hanau, a town in Hesse, Germany (Shown left). That original cast iron chess set dates from around 1845. The King in this set stands 3.8″ tall with a 1.3″ diameter base. For this iteration on the Zimmerman design, the carver changed the Rooks from Elephants to reticulated Castles. Except for the Rooks and Knights, all the corresponding figures in the Light and Dark armies are different characters. The dark pieces have been treated with a distressed antique brown finish. The Ivory Zimmerman style Chess Pieces consist of 32 pieces. and are in new condition. The glass display case shown is  included, The chessboard shown is not included, but a suitable chessboard can be found here.

The inscription on the base of the Black Queen appears to have been a dedication. It is likely that the inscription: Dem Obmann Unterföhring suggests that this chess set was a gift to the Mayor, or other figure of importance, of the Bavarian Municipality of Unterföhring in Germany.

The theme of the chess set is ‘The Thirty Years War’. This was a conflict from 1618-1648 between the armies of Emperor Ferdinand II of the Roman Catholic Empire and Gustav II Adolf, King of Sweden.

The designer of the Zimmerman set was a sculptor called Malchow, who is responsible for most of the Zimmerman sets. The cast iron original was copied and produced in Offenbach am Main, near Frankfurt, by an ex-employee from Zimmermann named Seebass. The most famous of the Zimmerman sets was the metal set awarded to Paul Morphy on the occasion of his winning the First American Chess Congress in 1857.