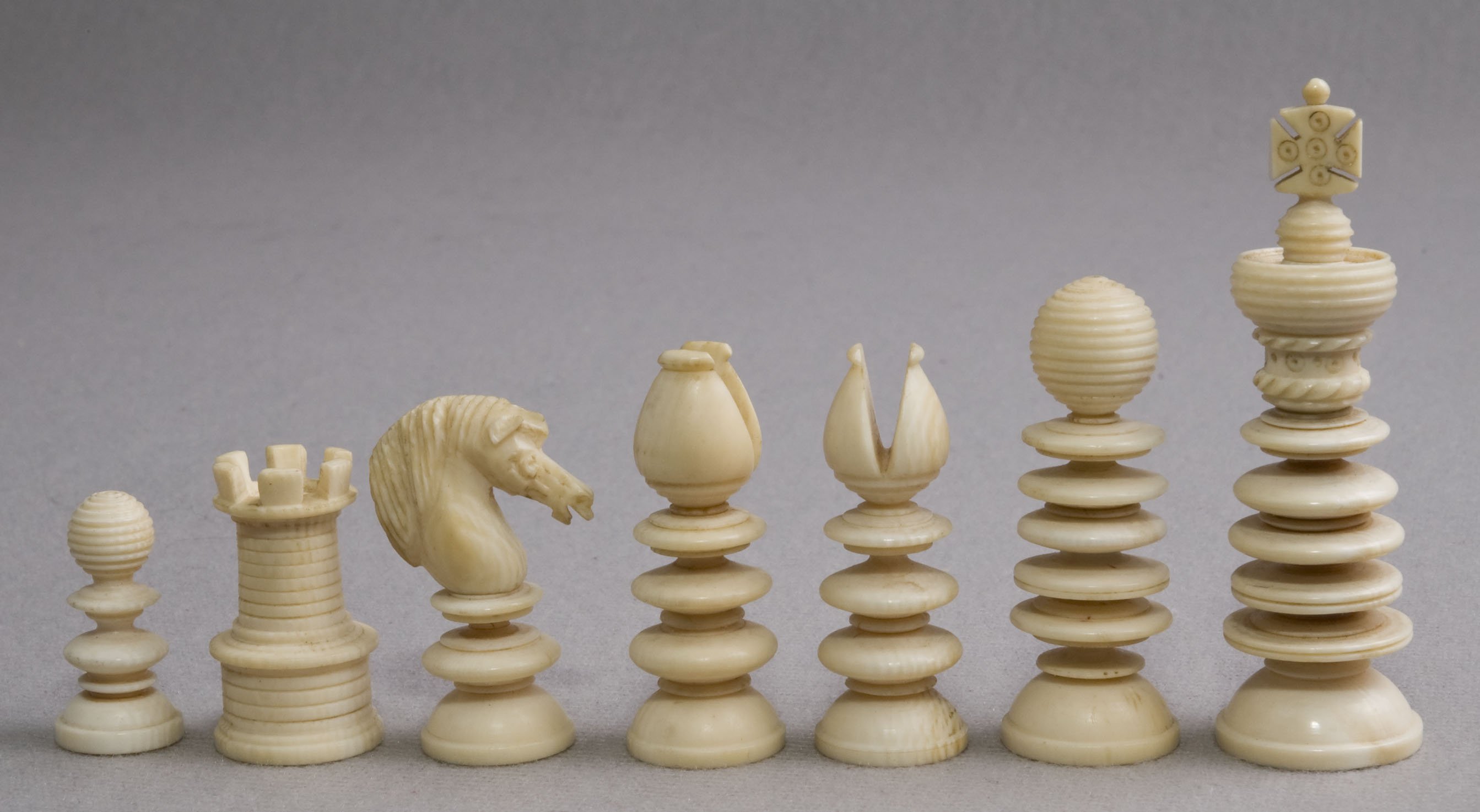 A Small Lund Antique Ivory Chess Set fabricated from African Elephant ivory and manufactured by Thomas Lund at the start of the 19th Century. The underside of the Kings bears the Lund maker’s mark, These antique chessmen are natural and red-stained. The King stands 2-5/8” tall with a 0.8″ diameter base. The King sports a large Maltese cross finial. The Queen does not have a finial. The chessmen are in excellent condition. This is an early Lund, as evidenced by the miter design of the Bishop. Thomas Lund manufactured chess sets from the early 1800’s until his death in 1843. William Lund, Thomas’ son, continued to make sets throughout the remainder of the 1800s.

This small Lund pattern chess set, is a pre-1840s design. The more elaborate fleur-de-lis Queens finials would have adorned on these sets after 1840 or so.

Lund Pattern chessmen are a subset of the English Type I Playing sets. Aside from Lund, these sets were also made by Jaques of London, as illustrated in the adjoining image. The Lund sets featured finely turned chessmen with ribbed, baluster bodies with stepped domed bases, and a very distinctive Knight head. They were sold in several different sizes and configurations. Sizes can range from a small 2-5/8″ King to full-size sets measuring 4-3/4″ and larger. Kings in the better sets will have reeded crowns surmounted by a large Maltese cross finials with either three or five small spherical adornments. The Queens have spherical reticulated headpieces surmounted with one of three finial types. The finial types are a feather finial, the more decorative fleur-de-lis finial and a simple reticulated sphere. Some sets were also produced with the Queens lacking a finial. Lund style chessmen suffer from the same instability problems as many pre-Staunton designs.

The term English Type I Playing Set is used to describe a range of English Playing chess sets, primarily fabricated from ivory, and made mostly, but not uniquely, in England during the 19th century. This poplar chess set design is characterized by narrow tapered, ringed bodied, Kings and Queens. The Kings will normally have reeded crowns surmounted by Maltese Cross finials. The Queens will normally sport either a Feather or Fleur de lis  finial mounted atop a reeded spherical headpiece. Rooks are normally stout, full-bodied towers, often sporting tapered staffs or flags. English Type I Playing Chess Sets first appeared at the beginning of the 19th century and were in common use through the early 20th Century. Aside from William and Thomas Lund, English Type I chessmen were produced by John Calvert, John Jaques, George Merrifield, Fischer, Hezekiah Dixon and Charles Hastilow, among others.