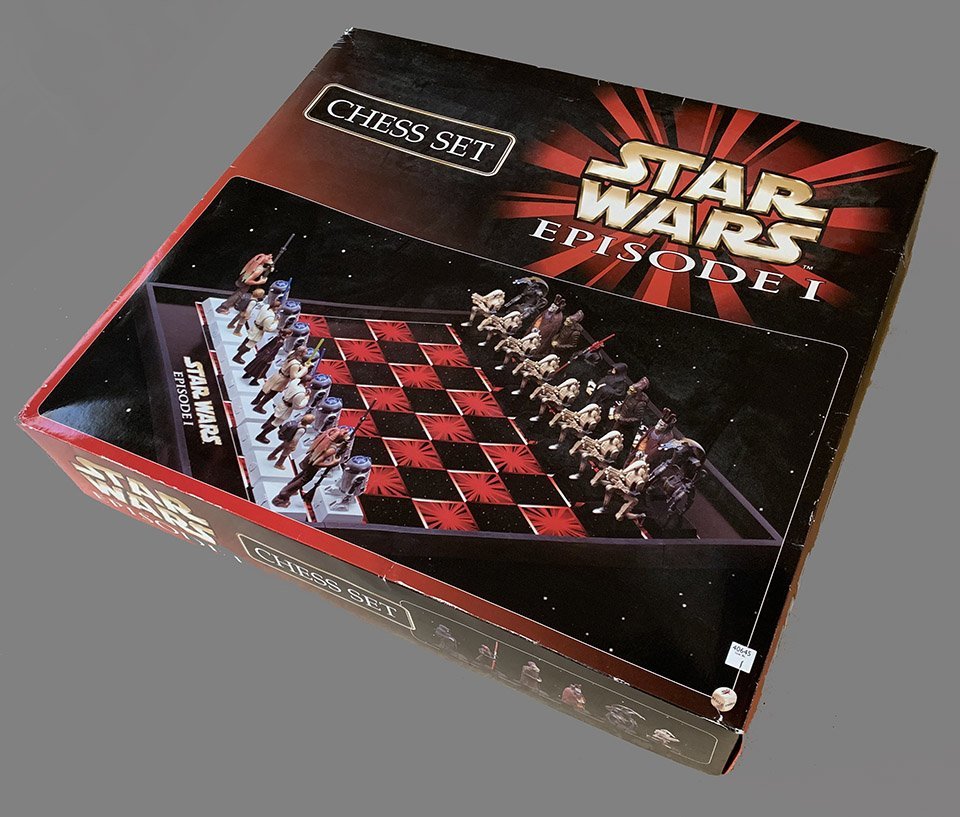 The authorized Star Wars Episode I Chess Set: The Phantom Menace, released in 1999.  The Star Wars Episode I Chess Set is in its original box, slightly shelf-worn. The chess set includes the 32 action figures, the Star Wars folding chessboard, the chessboard support frame and rules. The box shows some lid sag and shelf wear, but the set appears to have been unused. The bottoms of each of the chessmen is marked Lucasfilm Ltd @TM. The chess set was manufactured by Really Useful Games Company, Ltd.

In 1977, George Lucas released Star Wars. It quickly became the biggest money-making film of all time and changed the shape of the film industry. Two successful sequels followed (1980’s The Empire Strikes Back and 1983’s Return of the Jedi), that extended the story of the first film,

In 1999, Lucas returned to the Star Wars saga with a new approach — instead of picking up where Return of the Jedi left off, Star Wars Episode I: The Phantom Menace, would be the first of a trilogy of stories to trace what happened in the intergalactic saga before the first film began. Here, Obi-Wan Kenobi (Ewan McGregor) is a young apprentice Jedi knight under the tutelage of Qui-Gon Jinn (Liam Neeson). Anakin Skywalker (Jake Lloyd), who will later father Luke Skywalker and become known as Darth Vader, is just a nine-year-old boy. When the Trade Federation cuts off all routes to the planet Naboo, Qui-Gon and Obi-Wan are assigned to settle the matter, but when they arrive on Naboo they are brought to Amidala (Natalie Portman), the Naboo queen, by a friendly but opportunistic Gungan named Jar Jar. Qui-Gon and Obi-Wan plan to escort Amidala to a meeting of Republic leaders in Coruscant, but trouble with their spacecraft strands them on the planet Tatooine, where Qui-Gon meets Anakin, the slave of a scrap dealer. Qui-Gon is soon convinced that the boy could be the leader the Jedis have been searching for, and he begins bargaining for his freedom and teaching the boy the lessons of the Force. Samuel L. Jackson (Jedi master Mace Windu) told a reporter before The Phantom Menace’s release that the best part about doing the film was that he got to say “May the Force be with you” onscreen.