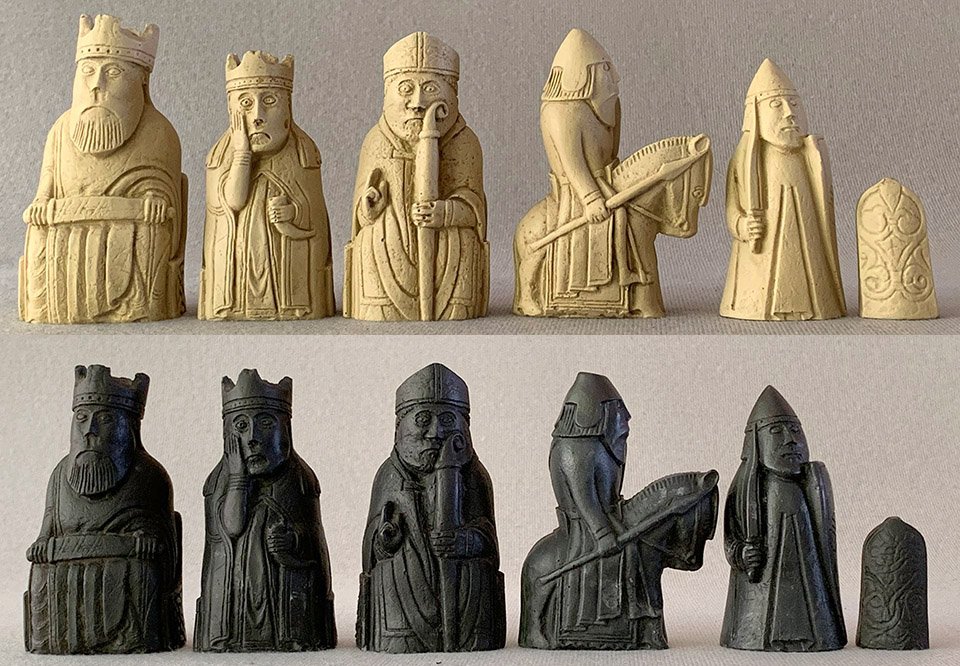 This lot features the very rare Steven Hudson Isle of Lewis Chessmen Replica, cast in black and ivory ceramic-like material. This edition was a very limited offering. Each piece is individually hand-cast and antiqued using a proprietary process called “Cold-Casting” which took over three years to perfect. This process is used by the World’s leading sculptors and architects. The result is a product that has the same weight, feel and finish as the original. The ivory colored pieces are virtually indistinguishable from the hand-carved Walrus ivory originals. These are the ONLY exact replicas of the original Isle of Lewis Chess pieces currently residing in the British Museum. The tallest piece, the King, stands 3-7/8″ tall with a 2″ long base. The chessmen are naturally heavy, not requiring additional ballast. The bottoms of the chess pieces are polished, not felted.  Being an exact replica, the chessmen are larger than the typical stone resin Lewis Chessmen currently sold. An unusual feature of this set is, much like the originals, the pieces of the same rank are slightly different, requiring a separate mold for each of the chessmen. This can be seen very clearly in the images provided. These chessmen were hand-cast and retailed in the United Kingdom, starting in the early 1970s. The Steven Hudson Isle of Lewis Chessmen Replicas are housed in two compartmentalized, fabric-covered boxes. Each piece is stored in a sturdy draw-string bag. These Isle of Lewis chessmen will require a chessboard with 2-1/4″ squares. The chessboard shown is not included in this sale. A complete selection of our fine vintage and modern chessboards can be found here.

The Isle of Lewis Chessmen are the most important chess pieces in history. These World-famous pieces are believed to be of Scandinavian origin and carved before 1200 a.d. Ever since the ivory pieces were discovered sometime before 1831 on the Isle of Lewis in Scotland’s Outer Hebrides, these kings, queens, knights, rooks, bishops, and pawns carved from walrus tusk and whale tooth have long fascinated us due to their exquisite craftsmanship, unusually evocative faces, and strikingly Norse character.

Today 82 of the 93 known pieces are in the British Museum, and the remaining 11 are at the National Museum of Scotland in Edinburgh. Despite their fame, some key details about them remain unknown. Here are 12 facts we recently learned about the Viking ivory chessman. Most are found in Nancy Marie Brown’s new book Ivory Vikings: The Mystery of the Most Famous Chessmen in the World and the Woman Who Made Them, which draws upon Icelandic sagas, archaeology, history, and forensics to locate the chessman in a time in history when the Norse ruled the North Atlantic.