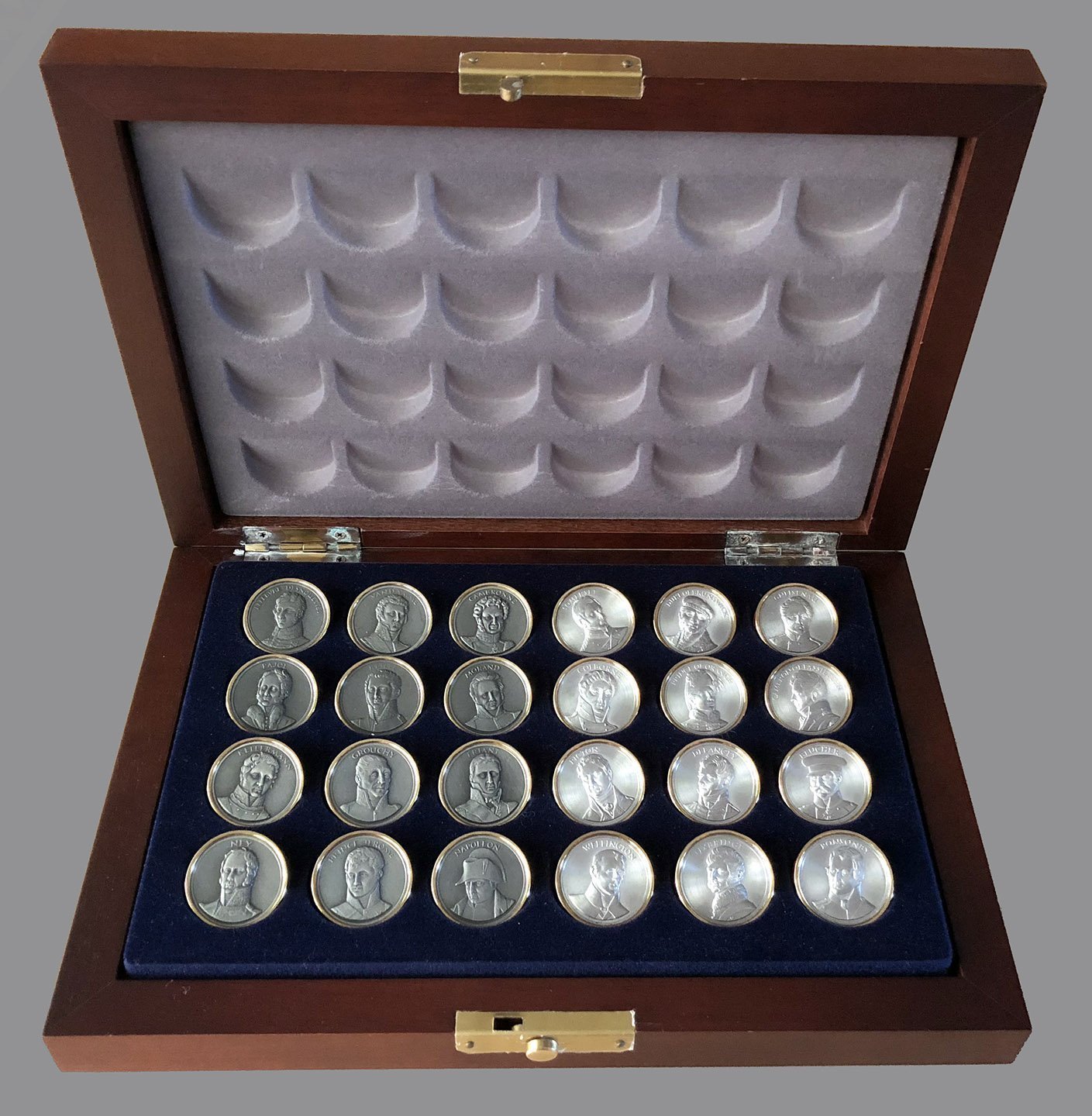 Battle of Waterloo Checkers by The Franklin Mint.

Offered here is an original set of Battle of Waterloo Checkers by The Franklin Mint. The set contains 24 silvered Brass coins on fine Red and Blue enameled embellishments. The medals measure 1-1/4″ in diameter by 1/4″ Thick. They are stamped with busts of the the commanders. The fitted wooden storage box lid lifts to reveal separate storage compartments for each of the thirty Waterloo checkers. The set is complete and like new. Circa 1984

The Allies consist of the following characters: Arthur R. Wellesley, 1st Duke of Wellington, Catherine, Duchess of Wellington, Marshall Gebhard Leberecht Vvn Blücher, Prince of Wahlstadt;  William, Prince of Orange-Nass. The Knights: Lieutenant-General Sir Thomas Picton; Lieutenant-General The Earl of Uxbridge, The Heraldic Lion of Flanders and England is impressed on the obverse side of each coin.

The Battle of Waterloo, which took place near Waterloo in present day Belgium, then part of the United Kingdom of the Netherlands. The battle was joined on Sunday, June 18, 1815. It marked the final defeat of Napoleon Bonaparte, who conquered much of Europe in the early 19th century. Napoleon rose through the ranks of the French army during the French Revolution. He seized control of the French government in 1799 and became emperor in 1804. Through a series of wars, he expanded his empire across western and central Europe. The Battle of Waterloo, in which Napoleon’s forces were defeated by the British and Prussians, marked the end of his reign and of France’s domination in Europe. The French army, under the command of Emperor Napoleon Bonaparte, was defeated by two armiers. The armies were the Seventh Coalition: a British-led Allied army under the command of the Duke of Wellington, and a Prussian army under the command of Gebhard Leberecht von Blücher, Prince of Wahlstadt. The battle marked the end of the Napoleonic Wars. The defeat at Waterloo ended Napoleon’s rule as Emperor of the French, and marked the end of his Hundred Days return from exile. This ended the First French Empire, and set a chronological milestone between serial European wars and decades of relative peace.