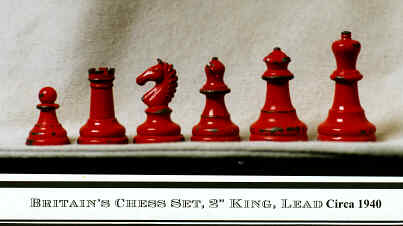 This offering is an interesting set of W. Britains Lead Chessmen, hollow, red and black lacquer. The King is 2″ tall. The chessmen have rust colored base pads and are housed in an imitation brown snakeskin leatherette covered cardboard box. The box measures about 11″ x 8-3/4″.  Printed on both the lid and the liner is “Manufactured by W. Britain in London England. Trade Mark Regd. No. 459993” is printed on the inside. There is  no chessboard or instructions. The set is complete and chessmen are in very good condition. The box is in good condition. The chessmen are circa 1940s.

The William Britain, W. Britain or simply Britain’s name is synonymous with toy soldiers. Since 1893 W. Britain has been producing toy soldiers and military miniatures. Each model figure is cast out of metal and hand painted. Their figures span most major time periods from the nineteenth century up to the conflicts of the twentieth century. There are two basic periods of Britains Toy Soldier production – Pre-War (before WWII) and Post-War (1947-1966).