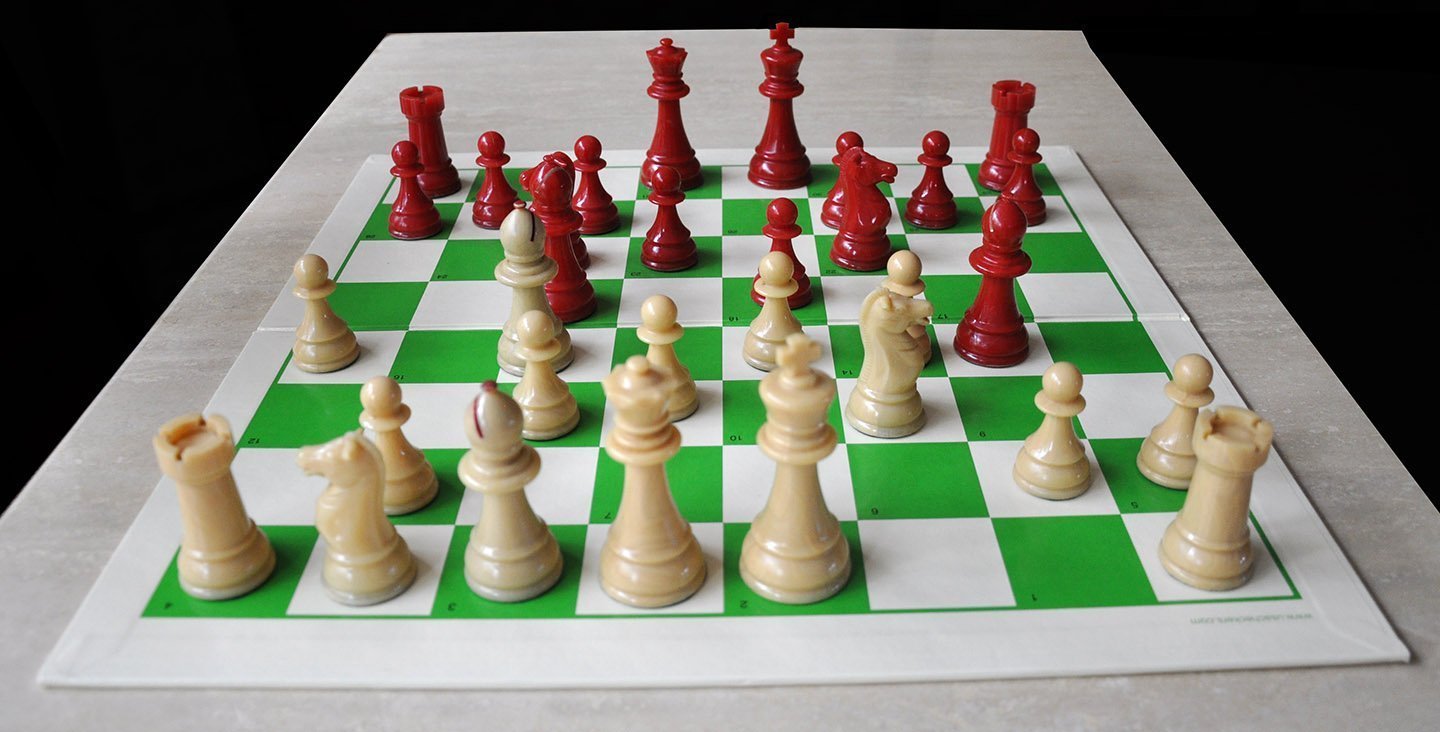 Offered here is a very rare example of the Windsor Castle chessmen in red and natural plastic. The King stands 3.8″ tall with a 1.6″ diameter base. The chessmen are heavily weighted and sit atop green felt base pads. The chessmen were cast from a rather brittle plastic. As a consequence, most of these chess sets, when they can be found, exhibit severe chipping around the bases of the chessmen. This particular set is in near perfect condition. These sets were originally offered in Black or Red and natural and could be had either weighted or unweighted. The weighted versions normally show far more damage than their unweighted brethren.A later run of these sets was attempted in the late 1960s using a different plastic and pure white pieces, often housed in a faux alligator leatherette snap case.

These plastic chessmen seem to have took hold rather quickly in the American chess scene. Throughout the 1950s and through the 1960s, Windsor Castle chess sets could be found in abundance in just about every chess club and venue in the States. The sets adorned the Chess Review covers and photographs throughout that publication during those two decades. Then, mysteriously, they vanished. The Continental Chess Association claims to have had hundreds of these sets on-hand at one time. Now, they are unable to locate even one example.

Nowadays, these once ubiquitous chessmen are almost extinct. Good examples are prized by collectors. Even very poor examples command healthy prices at auction – when they can be found. Red and Natural sets, like the one offered here,  are far more scarce and only a few examples are known to exist. This particular red and natural set, with almost no damage, is believed to be the finest example in existence.

What happened to these sets and who actually manufactured them? The history of these once very popular chess sets is enigmatic. Here’s what we have been able to pull together so far.

The first appearance of the Windsor Castle chessmen appears to have been in December of 1948 at the Manhattan Chess Club. During the Christmas/New Year’s week of December 23 1948 through January 2, 1949, the Manhattan Chess Club hosted the New York International Tourney.  Reuben Fine prevailed with a score of 8 – 1 over the ten-man field which included Miguel Najdorf and Dr. Max Euwe.  From the photographs which appeared in the January 1949 issue of Chess Review (pages 3 and 4), it appears that at least some of the boards were furnished with Windsor Castle chessmen.  The photograph on page 3 shows Rubin Fine playing the White pieces of a Windsor Castle against Al Horowitz; the photograph on page 4 shows 18-year old Arthur Bisguier playing the White pieces against Miguel Najdorf.

In the June 1949 issue of Chess Review, on page 180, there is a 1/6th page ad for Windsor Castle chess sets, shown here on the left.  Based on my research to date, this ad is the first commercial reference to the Windsor Castle chessmen to appear in Chess Review.   Here is the full text of that ad:  “These chess sets are of authentic Staunton design, regulation club size (4″ King).  Breath-takingly beautiful, they are also strong and durable with felted bottoms.  Approved by authorities.  Reasonably priced for immediate delivery.  Price:  $15.65  Leo Gladstone 232 West 30th St. New York, N, Y.”   Unfortunately, there is no indication of who the actual manufacturer was.  The Leo Gladstone ad re-appeared at page 301 of the October 1949 issue of Chess Review.

The cover photograph of the April 1950 issue of Chess Review is a photograph by Ira Gay Sealy, previously published in the Denver Post newspaper, showing former U S Open Champion Weaver Adams in a simultaneous exhibition at Denver.  At least two of the sets shown in that photograph appear to be the red-and-white variation of the Windsor Castle set, en suite, with a deluxe presentation box. In the October 1950 issue of Chess Review, at page 292, the Leo Gladstone advertisement reappears, with a few modifications.  First, the price has increased by a dollar, now up to $16.65.  Second, Mr. Gladstone has moved his businesses address to 140 West 30th. Street, and he now lists a telephone number — LOngacre 5-1548. It makes sense that these sets first appeared on the New York Chess scene, since Gladstone’s is a New York address. Whether he sourced the chess sets or had them produced in the States remains a mystery.