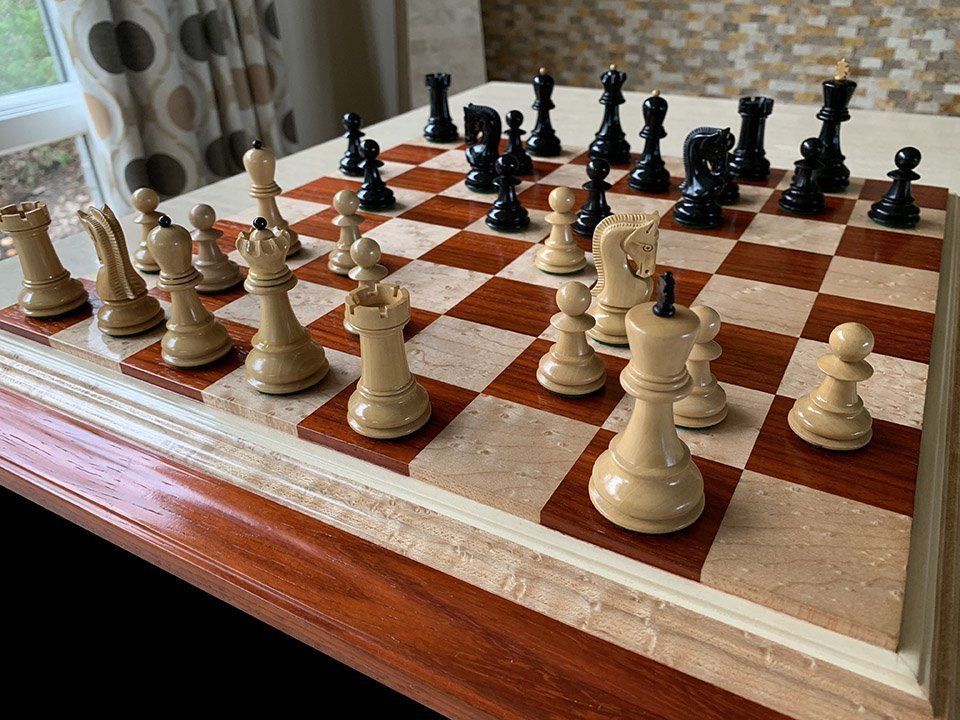 Zagreb 1959 Library Chessmen by The House of Staunton.

This is a set of Zagreb 1959 Library Chessmen in Natural and Black Lacquer by The House of Staunton.  The King stands 2-7/8″ tall with a 1-3/8″ diameter base. The chessmen are weighted and cushioned with green felt base pads. This set of chessmen includes an extra set of Queens to facilitate Pawn Promotion, a feature pioneered by Frank Camaratta and The House of Staunton. The chessmen are housed in a green felt-lined and divided red Mahogany House of Staunton hinge top box with a brass-plated latch. The pieces are reproductions of the chessmen used in the  Bled-Zagreb-Belgrade 1959 Candidates Tournament in a home analysis size. The Kings, Bishops and Queens have opposite-color interchangeable finials. The King comes with both the traditional Christian Formeé cross as well as an Eastern ball finial. The chessmen are like new and have never been used. The chessboards shown are not included, but a suitable chessboard can be found from our extensive selection of modern and antique chessboards.

The grueling 28 round Bled-Zagreb-Belgrade 1959 Candidates Tournament was held in 1959 to determine the challenger for World Champion Michael Botvinnik’s title. The tournament was won convincingly by Michael Tahl who scored an amazing 20/28 to win by 1-1/2 points over his nearest rival, Paul Keres. Tahl won 16 games, drew eight games and lost four games. He won all four of his games against Fischer, but three of his four losses were to second-place finisher Paul Keres. When hes was asked many years later about his lopsided result against Fischer, Tahl replied “Tahl was Tahl, but Fischer was not yet Fischer!”

Tahl went on to decisively defeat Botvinnik in their 1960 World Championship Match by a score of 12.5-8.5 to become the World’s youngest World Chess Champion at the age of 23. Tahl lost his rematch with Botvinnik and 1961. The loss was attributed in part to illness.  His health was quite frail since his childhood and often failed him. His drinking and smoking habits and excessive party-going didn’t help matters. A charming, witty, highly educated, lady’s man,  Tahl passed away in 1992, just 55 years old.