Introduction to The John Jaques Company

The John Jaques Company, formerly located in London, is the oldest games company and sports manufacturer in the world. They have been manufacturing chess sets for nearly 200 years.  Their most significant and historic design is the Staunton pattern, which they manufactured in 1849. Today, every tournament game of chess is played on a Staunton-design set. In addition to Staunton pattern chess sets, Jaques manufactured other types of sets of popular designs, including Northern Upright, St. George, Dublin and the ubiquitous Barleycorn patterns.

Aside from Chess, Jaques have been responsible for inventing many well-known games, such as Croquet, Ping Pong, Snakes and Ladders, Ludo, Tiddledywinks, Happy Families, Snap and many more.

Thomas Jaques was a farmer’s son of French Huguenot descent. His recent forebears must have found refuge in England sometime after 1685 when the Edict of Nantes forbade Protestantism in France. Thomas was born in 1765 by which time George III had been on the throne for five years and was already fighting a losing battle to retain the American colonies. At home, the Georgian Period was in full flower. 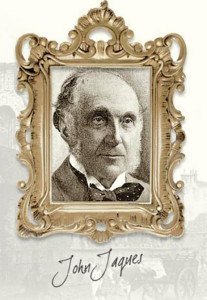 Thomas’s instinct and good sense obviously extended into his private life: at twenty-one, Thomas married Mr. Ivy’s niece. Thomas continued to work for Mr. Ivy. Nine years later, his employer, mentor (and uncle by marriage), died. Thomas, now thirty, was so well-versed in his craft that he could take on the business and establish himself as “Thomas Jaques, (Manufacturer of Ivory, Hardwoods, Bone, and Tunbridge Ware)”. Thus, it is from this date, 1795, that John Jaques marks its official beginning.

At fifteen, John was apprenticed to his father and five years later partnered him in the firm, which became “T. and J. Jaques, Wholesale Ivory Turners.” It was, by this time, too narrow a description, as their materials now, included hardwoods. Lignum Vitae was the unique wood which was to become Jaques croquet mallets. Turkey boxwood was destined for mallets and balls. In fact, before long Jaques would become timber-based, as they are now, 200 years on.

Their business card of 1816 shows an enterprising, expanding range of products and materials. Consider the item, “Dentists supplied with Sea Horse Teeth” — false teeth made from hippopotamus ivory! As the father and son partnership prospered, so the family grew. John married, and in time fathered a son: John Jaques II. He, too, was apprenticed as a young man to the family firm, which by now had expanded into additional premises in Hatton Garden. (Leather Lane was retained.) Tallis’ London Street Views, a series of steel engravings issued in 1838, shows their new headquarters at Number 102 Hatton Garden.

A Bit of the Staunton Chessmen History

The Staunton Pattern was first offered to the public for sale in the Fall of 1849 by the John Jaques Company of London. The original design was registered to Nathaniel Cooke in the Spring of that year. The set was named after the self-proclaimed world champion, Howard Staunton, an English Shakespearean scholar. Whether or not the design was actually the brainchild of Cook is open to much speculation. It is relatively certain that the pattern was not designed by the egotistical Staunton, as he never laid claim to such.

A plausible scenario, if Cook was Jaques’ Brother-in-law as claimed by the family, is that the set was actually designed by John Jaques, a noted ivory tuner and business man, who undoubtedly produced many different pattern sets for various retailers in the area. Complaints from players about the unsuitability of many of the contemporary designs for practical play led Jaques to search for a standard design which could be produced at a reasonable cost. Most of the sets of the period, such as the Lund, Merrifield, Calvert and Saint George patterns, were quite intricate and relatively expensive to produce. Working from an existing popular design, most probably the Northern Upright (or Edinburgh) pattern, Jaques removed those decorative features most susceptible to damage and widened the bases, adding lead to the wooden pieces for further stability. By so doing, he corrected most of the design deficiencies found in many of the contemporary designs and produced a set which was relatively inexpensive to manufacture, thus increasing his potential customer base.

Having a new design in hand, John Jaques turned to his brother-in-law and entrepreneur, Nathaniel Cook, for advice. Probably for a small percentage, Cook offered to register the design and convince the noted chess personality, Howard Staunton, to lend his prestigious name to the new design. Since Cook was reputed to be Staunton’s editor at the Illustrated London News, a convenient business relationship already existed.

What is known is that, on 1st March, 1849, Nathaniel Cook, 198, Strand, London, registered an Ornamental Design for a set of Chess-Men, under the Ornamental Designs Act of 1842. At that date, there was no provision for the registration of any design or articles of ivory, registration was limited to Class 2, articles made chiefly of wood.

The right to manufacture such sets was acquired by John Jaques and, having manufactured sufficient stock, he began to supply the retail trade on 29 September, 1849. On the same day, the following advertisement appeared Illustrated London News: AA set of Chessmen, of a pattern combining elegance and solidity to a degree hitherto unknown, has recently appeared under the auspices of the celebrated player Mr. STAUNTON. A guiding principle has been to give by their form a signification to the various pieces – thus the king is represented by a crown, the Queen by a coronet, &c. The pieces generally are fashioned with convenience to the hand; and it is to be remarked, that while there is so great an accession to elegance of form, it is not attained at the expense of practical utility. Mr. STAUNTON’S pattern adopts but elevates the conventional form; and the base of the Pieces being of a large diameter, they are more steady than ordinary sets. Illustrated London News, September 8, 1849.

The Morning Herald writes: AA new set of Chessmen has recently appeared under the auspices of Mr. STAUNTON, who, observing their manifest superiority over the old figures in ordinary use, not only as works of art, but in the more practical necessities of convenience, has vouchsafed the guarantee of his name and recommendation. Those who have been in the habit of playing the game will remember the awkward, and inelegant structure of the generality of the shapes which have been in vogue. No artificial feeling until now has ever been brought to bear upon the formation of a pattern which should satisfy the eye both on the score of elegance and propriety .

Finally, the Morning Chronicle proclaims: AMr, STAUNTON, the well-known Chess-player, has associated his name with a new and improved set of Chessmen, of which we have seen a specimen. The chief respect in which these Chess-men differ from the various kinds now in use in this country is that the form of each piece more effectually represents what is intended to be conveyed: as for instance, The King is surmounted by a crown, the Queen with a Queenly coronet, and so in like manner with the other pieces.

If all the above sounds similar, it is safe to assume that the egotistical Staunton authored them all!  Staunton also had a good deal to say about the monument to his name. These celebrated Chessmen have now become the only recognized pattern amongst all players of the game. Their elegant form, designated so as not to obscure the view of the other pieces on the board, their nice adaptation to the hand, and their justly indicated value in relation to each other, give them a decided superiority over any others yet produced. And: In order to guard against fraudulent and inferior imitations of the STAUNTON CHESSMEN, the public are requested to observe that each box bears the signature of Mr. Staunton, and that the Maker’s name is stamped upon each set, without which none are genuine. Manufactured only by Jaques and Son, Hatton – garden, London, and may be had at all the principal Fancy repositories throughout the Kingdom. 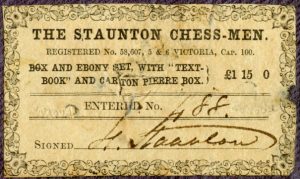 NOTICE: The Staunton Chessmen have a facsimile of Mr. Staunton’s signature attached to each box. It is necessary to state this clearly, as many Chessmen are offered as the Staunton Chessmen, but which have no right whatever to this title, being in every respect an inferior article.

In playing over the several demonstrations his labour will be greatly lightened, and his progress facilitated, by the use of the Chessmen to which we have alluded. To say nothing of their unquestionable superiority in form and proportion to all others intended for actual play, the happy thought of distinguishing the Pieces appertaining to the King, so that no confusion can arise throughout the longest game between the King’s Rooks and Knights and those belonging to the Queen,* renders them peculiarly adapted for the purposes of Chess Analysis; and is of itself sufficient, we hope, to entitle them to the preference of those amateurs who are seeking to improve their play. H. Staunton  *{ In the Registered Chessmen, the King’s Rook and Knight are distinguished from the same pieces on the Queen’s side by a small Crown stamped on their summit.}  London, September, 1849 from The Chess-Player’s Text Book, 1849,  by H. Staunton.

The rest is history. The Staunton pattern chessmen quickly became the world standard for serious and casual play. The relatively low production cost brought chess to the masses and did much to popularize the game. Its clean, simple design has never been equaled – the original design looks as modern today as it did upon its introduction over 145 years ago.