Offered here is a set of full Tournament size Capablanca Staunton Chess Pieces, heavily weighted with green baize base pads, designed to commemorate the charismatic third official World Champion, Jose Raúl Capablanca. The King stands 4″” tall with a 1-3/4″ diameter base. All the chessmen rest on a cushion of green baize to protect the surface of your chessboard. The Capablanca Staunton  Chess Pieces are new. Each set consists of 34 chess pieces, including an extra set of Queens to facilitate Pawn Promotion, now a standard that was introduced by Frank Camaratta over 20 years ago. These magnificent chessmen are available in Natural or Antiqued and Black lacquered Boxwood. Add $100 for Boxwood and genuine Ebony. Please make your choice on the checkout form when ordering. The chessmen play and display best on a chessboard with 2-1/4″ and 2-3/8″ squares. The chessboards shown are not included as part of this sale. Click here a complete selection of our finest new and antique chessboards. 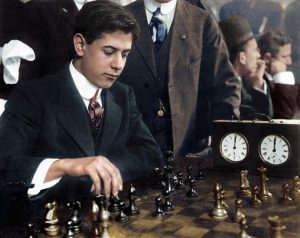 Born José Raúl Capablanca y Graupera on 19 November 1888, in Havana Cuba, Capablanca succeeded Emanuel Lasker as world chess champion from 1921 to 1927. A chess prodigy, he is considered by many to be one of the greatest players of all time, widely renowned for his exceptional endgame skill and speed of play. Capablanca defeated Cuban champion Juan Corzo in a match at the age of 12, His victory over Frank Marshall in a match in 1909 earned him an invitation to the 1911 San Sebastian tournament, which he won ahead of leading playersof the day, including Akiba Rubinstein, Aron Nimzowitsch and Siegbert Tarrasch. After several unsuccessful attempts to arrange a match with the then world champion Emanuel Lasker, Capablanca finally won the title decisively 1921. Capablanca ran undefeated streak for eight years from 10 February 1916 to 21 March 1924, when he was finally defeated in a spectacular game by Richard Reti.

Capablanca lost the title in 1927 to Alexander Alekhine, who had never beaten Capablanca before the match. Following several unsuccessful attempts to arrange a return match, relations between them became bitter. Capablanca continued his tournament dominance but withdrew from serious chess in 1931. He made a comeback in 1934, with some good results. His last major tournament was the AVRO tournament of 1938.

Suffering from high blood pressure for years, Capablanca died on 8 March, 1942, of a brain hemorrhage. Not long before his death, his familial hypertension had shot up to the ultra-hazardous 200–240/160+. The day before his fatal stroke, his vascular specialist Dr. Schwarzer strongly advised him that his life was endangered unless he totally relaxed, but Capablanca said that he couldn’t because his ex-wife and children had started court proceedings against him. On 7 March, 1942, Capablanca was observing a skittles game and chatting with friends at the Manhattan Chess Club in New York City, when he asked for help removing his coat, and collapsed shortly afterward. Eminent physician Dr. Eli Moschcowitz administered first aid and then arranged an ambulance. He was taken to Mount Sinai Hospital, where he died at 6:00 AM the next day. Coincidentally, Capablanca’s great rival Emanuel Lasker had died in the same hospital only a year earlier.] The doctor blamed his death on “his troubles and aggravation”.  The cause of death was given as “a cerebral hemorrhage provoked by hypertension”.

Capablanca excelled in simple positions and endgames. He wrote several chess books during his career, of which Chess Fundamentals was regarded by World Champion Mikhail Botvinnik as the best chess book ever written. His style of chess was influential in the play of future world champions Bobby Fischer and Anatoly Karpov. For a more detailed look into the life and career of Capablanca, click here.