Offered here is a set of Reproduction Dublin Chessmen crafted from Antiqued Boxwood and Ebony. This style of chessmen most likely dates from the late 1830s. The pieces are heavily weighted. The King stands 4-1/8″ tall with a 1-1/2″ diameter base.

Offered here is a set of Reproduction Dublin Chessmen crafted from Antiqued Boxwood and Ebony. The Reproduction was researched and executed by Frank Camaratta for The House of Staunton. This style of chessmen was used in the early and mid-Victorian Period and most likely dates from the late 1830s. The King stands 4-1/8″ tall with a 1-1/2″ diameter base. The Reproduction Dublin Chessmen are heavily weighted and rest atop green baize base pads. The Kings are cushioned on black English leather pads with gold embossing. A House of Staunton premium, divided, Mahogany hinge-top box, lined in green baize, is available. These Frank Camaratta Signature Dublin Chessmen are Part of The House of Staunton Pre-Staunton Series. The antique chessboard shown in the image is not included in this offering but can be purchased separately elsewhere on this website. Click here to view our extensive selection of new and antique chessboards and game timers. 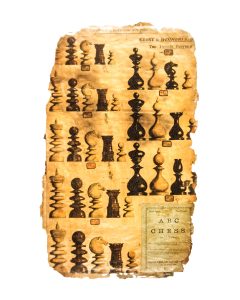 The Dublin Chessmen fall into the ubiquitous category often referred to as English Playing sets, which also included the Saint George, Northern Upright, Lund and Calvert patterns. The English Playing sets were ultimately supplanted by the Staunton chessmen which were introduced to the public in September of 1849. The Dublin Chessmen were likely designed for the Dublin Chess Club in the late 1830s. Similar sets of chessmen were made by Dixon, Thomas and William Lund, and John Calvert as well as George Merrifield and John Jaques, among others. This particular design is based on the Northern Upright sets manufactured by the Firm of John Jaques. An image of the Dublin Chessmen from a page in their 1860 Pattern Book is shown here.