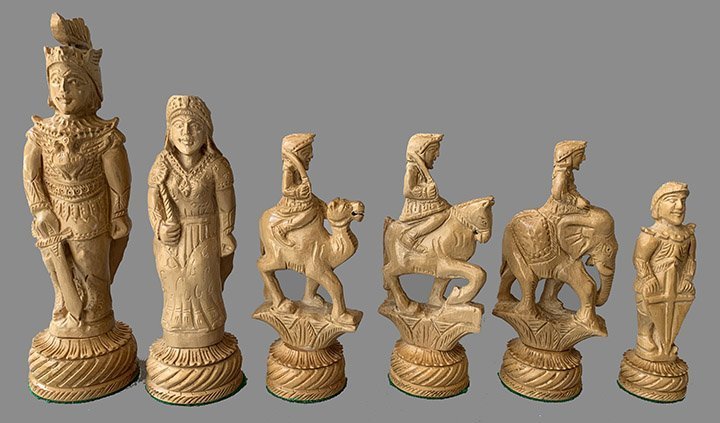 Here’s your chance to try your own military tactics with a set of Alexander hand-carved chessmen representing the World’s two great armies. The Kings stand a majestic 7″ tall with a 2″ diameter base. The chessmen are unused and were crafted in India around 1990 from native Pearwood and Rosewood.

After gaining control of the former Achaemenid satrapy of Gandhara, including the city of Taxila, Alexander the Great advanced into Punjab, where he engaged in battle against the regional King Porus, whom Alexander defeated in the Battle of the Hydaspes in 326 BC, The Battle of the Hydaspes was fought in 326 BC. King Porus had reigned over the Paurava Kingdom on the banks of the Hydaspes river in the Punjab region of the Indian subcontinent. Eventually the two forces met and arrayed themselves for the battle. The Indians were poised with cavalry on both flanks, fronted by their chariots, while their center comprising infantry with war elephants stationed every fifty feet in front of them, to deter the Macedonian cavalry. The Indian war elephants were heavily armored and had castle-like howdahs on their back carrying a trio of archers and javelin men. The battle resulted in a Greek victory and the surrender of Porus. Large areas of the Punjab between the Hydaspes and Hyphasis rivers were consequently absorbed into the Alexandrian Empire. Alexander’s decision to cross the monsoon-swollen river despite close Indian surveillance, in order to catch Porus’ army in the flank, has been referred to as one of his military masterpieces. Although victorious, it was also the most costly battle fought by the Macedonians. The resistance put up by King Porus and his men won the respect of Alexander, who allowed him to continue governing his own kingdom as a satrap. For more on this historic battle, click here.