The House of Staunton is now offering an extremely accurate reproduction of the highly prized Jaques Leuchars Carton-Pierre caskets. Each of our reproduction caskets duplicates the material and process used to fabricate the originals and also bears a facsimile of the original label with a unique “Entered No.” to further personalize this future heirloom. The panels, sides and lids were molded from an original casket to ensure absolute accuracy. Caskets can be ordered to accommodate the Tournament, Small Club and Full-Club size pieces. A facsimile of a matching carton-pierre chessboard will soon be available.

This sale is only for the Carton Pierre casket. It does not include the chessmen or the Carton Pierre chessboard shown. An accurate reproduction of the original Jaques 1849 Cook chessmen in bone with a facsimile of the green registration lozenges shown can be purchased here. For more on the background of the John Jaques company, click here. For a history of the Staunton Chessmen, click here.

Please note that these are REPRODUCTION caskets. The Carton-Pierre caskets and chessboard panels are hand-made in the U.S.A. and is a very labor-intensive undertaking.

The Carton-Pierre casket was designed in 1849 for Leuchars by Joseph L. Williams using the carton-pierre material designed and manufactured by George Jackson & Sons. These Neo-Gothic Sarcophagi were produced solely to house the revolutionary new Staunton Chessmen, registered by Nathaniel Cooke and introduced by Jaques of London in September of 1849. An image of an original carton-pierre casket and chessboard is shown here. The original caskets were made in three basic sizes, all using the same four sides and lid, but with three different base configurations to accommodate the four different sizes of chessmen produced by Jaques at that time. 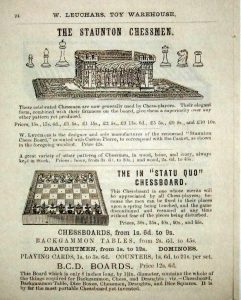 The caskets designed for the Library-size sets (7.3 cm) had a raised bottom. The standard size casket housed the Tournament (8.9 cm) and Small-Club sizes (10 cm). A larger Carton-Pierre casket was offered to house the full Club-Size sets (11 cm) buy adding a false bottom. Leuchars was established at 47 Piccadilly, London in 1794 by James Leuchars. In 1820, the business moved to 38 Piccadilly, shortly before James Leuchars died in 1822. Lucy Leuchars, James’ widow, continued the business under the name of L. Leuchars. In 1837.

The following article introducing the new Staunton Chessmen and the Carton-Pierre casket first appeared in the Illustrated London News in October of 1849:

“The most Elegant Christmas Present for New Year’s Gift is a set of THE STAUNTON CHESSMEN, in the unique box of Carton Pierre, resembling Richly Carved Ebony. In the finest African Ivory, 5 guineas; Wedgwood’s Carrara, £3; Ebony, etc., £1 15s; Club size, loaded, £2 5s, in mahogany box. Each box containing an admirable Treatise on chess by Mr. Staunton, May be obtained of all dealers of Chess-men. Wholesale, Jaques, Hatton-Garden. Any bookseller can procure them.