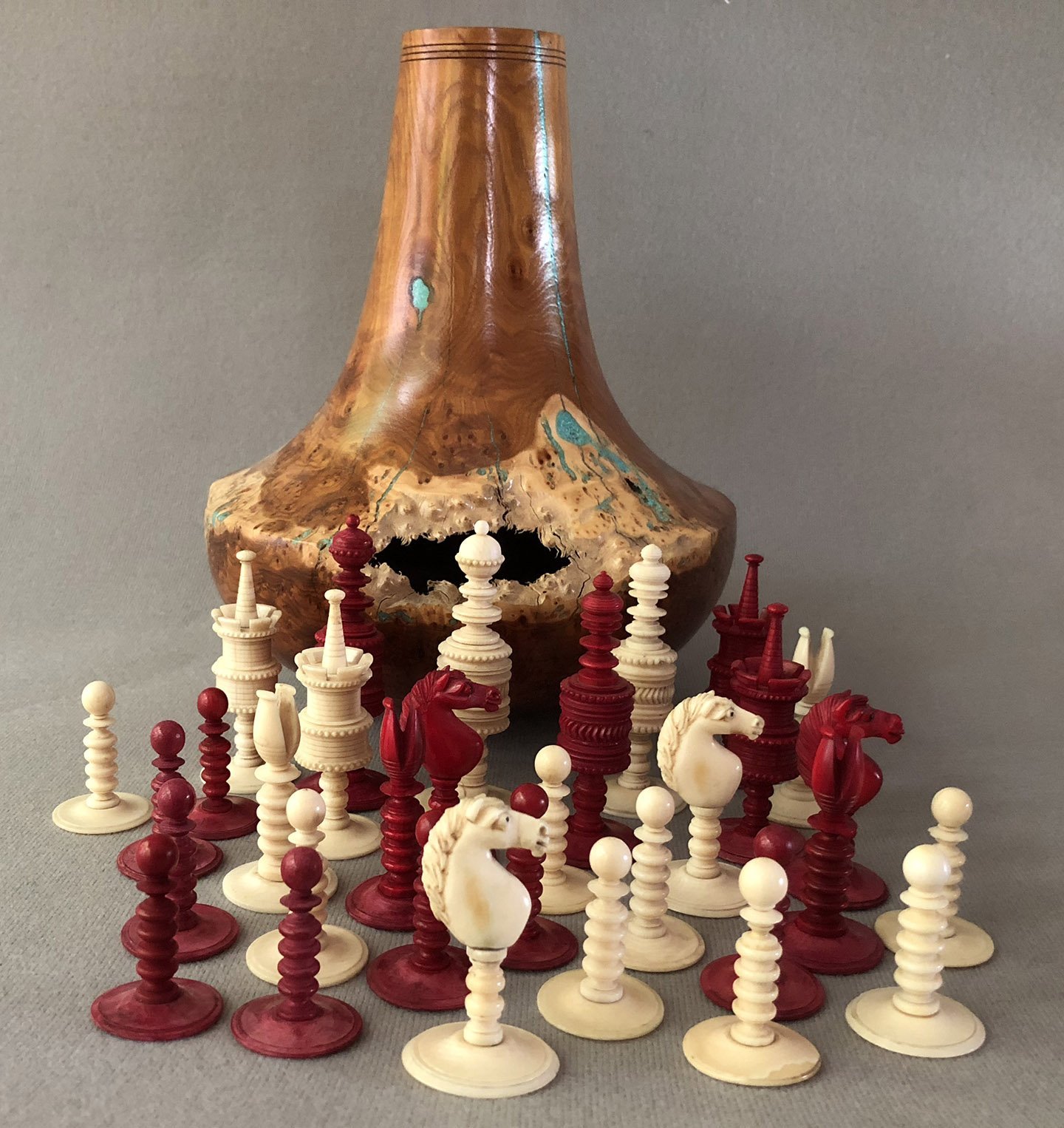 This offering is a fine set of  circa 1840s Antique Type II English Chessmen, often incorrectly characterized as a Barleycorn-style chess set. True Barleycorn style chess pieces have broad barrel-bodied Kings and Queens, and are normally fabricated from bone, rarely ivory. The chessmen here are natural and red-stained ivory.  The chessmen fall in to the ubiquitous English Playing Set category, referred as Type II Playing Sets. The Kings and Queens feature  well-turned barrel-shaped bodies typical of the Type II Barleycorn design, mounted atop slender-turned pedestals. The King stands 3.4″ tall with a 1.3″ diameter base. The bodies of the Royal pieces are heavily decorated. The headpieces are  surmounted with a small ball finial. The lack of a King’s cross finial belies the set’s true size. A Cross finial can add as much as 1/2″ to the advertised height of the King. The Rooks are stout, pedestal mounted, reticulated towers with staff finials. The Bishops, Knights and Pawns resemble styles seen on typical English Playing Sets. The chessboard shown is not included with the chess pieces. A suitable chessboard may be obtained elsewhere on this web site. Please click here.

The term English Type II Playing set is used to describe a range of English Playing chess sets, primarily fabricated from ivory, and made mostly, but not uniquely, in England during the 19th century. This poplar chess set design is characterized by heavily adorned, ringed bodied Kings and Queens, mounted atop baluster or turned pedestals. The Kings will normally have reeded crowns and may be surmounted by the traditional Maltese cross or other decorative finial. The Queens will have spherical crowns, sometimes lacking finials.  Rooks are stout, full or pedestal mounted towers, often sporting tapered staffs, flags or Howdahs (secondary towers). Bishops, Knights and Pawns are pedestal-mounted which are usually turned or reeded.  Normally, the designs of the Bishops, Knights and Pawns are essentially identical to those found on English Barleycorn Playing sets. The English Type II Playing Chess Sets first appeared at the beginning of the 19th century and were in common use through the early 20th Century.