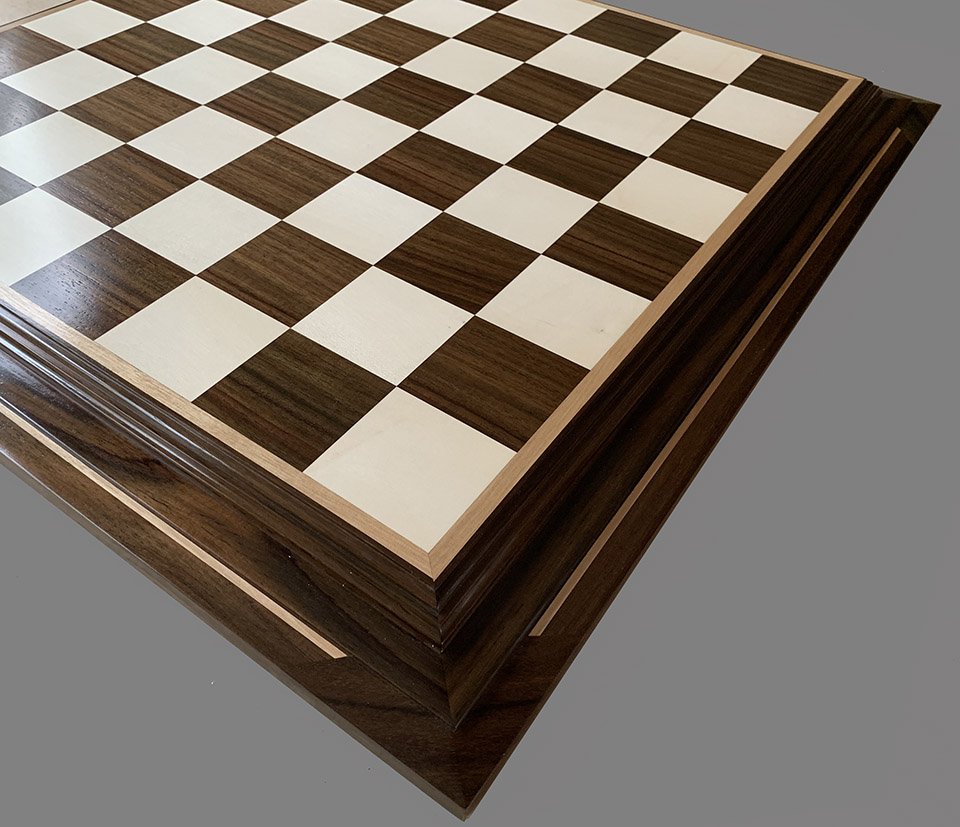 A Holly and East Indian Rosewood Chessboard with 2-3/8” squares and a solid East Indian Rosewood Frame and an African Sapele delimiter and inlay. The chessboard measures 23-3/4” Square. The almost ivory-like appearance of the Holly used for the light squares makes this a particularly alluring chess board. The chessboard is in like-new condition and is accompanied by its original certificate of authenticity and a custom-made protective brown soft cotton slip-case. The back of the chessboard is marked with its unique serial number, 11024. Our complete line of Antique, Custom and Luxury chessboards can be found here.This premium chessboard, which is part of the Camaratta Signature Chessboard Series, was designed and Crafted by Bill Lisica.

East Indian Rosewood, Dalbergia latifolia, can vary in color from a golden brown to a deep purplish brown, with darker brown streaks. The wood darkens with age, usually becoming a deep brown. East Indian Rosewood has been used extensively on acoustic guitars since the mid 1960s as a substitute for the now-endangered Brazilian Rosewood.

Like other exploited hardwoods such as Cuban Magogany and Teak, it has earned worldwide fame. Historically, it has perhaps been the species most frequently associated with the term “Rosewood,” and with its strength, hardness, stability, beauty, and acoustic properties, it’s easy to see why Dalbergia Latifolia has been used for everything from flooring to xylophone keys and other musical instruments.

American Holly (Ilex opaca), the state tree of Delaware, has brilliant red berries and dark green leaves that are popular decorations during the Christmas season. When the Pilgrims, who landed in Massachusetts days before Christmas in 1620, saw the American holly and its red berries they were joyfully reminded of the holly in England that is inseparably connected with the merry-making of Christmas.
Heavily harvested, Holly is hard to find in large trees. Wood supplies are limited and prices are high for good holly lumber. The attraction of holly, in addition to the foliage and berries, is that holly is one of the whitest woods known. In the past holly veneer and veneer inlays were very popular. The use for specialty items, such as engravings, scroll work, carvings, and so on has been very important. Whip handles were one old use, as well as keys, pegs and other items in musical instruments.